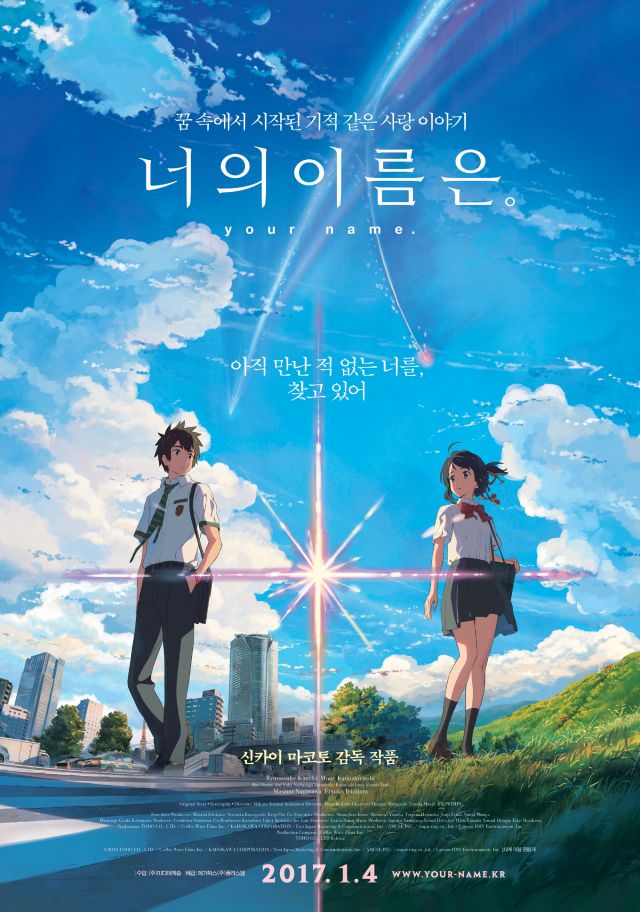 For the first time in over a decade, a Japanese anime has entered at the top of the South Korean box office. Makoto Shinkai's fantasy romance anime "Your Name" (based on Shinkai's own novel of the same name) officially opened on Wednesday after becoming the second-highest grossing anime film in Japan late last year where it banked over $288 million (Hayao Miyazaki's "Spirited Away", the highest-grossing anime, sits on $289 million). From 944 screens, "Your Name" captured 31.3% of the sales (832,040 admissions) to dislodge last weekend's number one, Cho Ui-seok's crime flick "Master".

Morten Tyldum's "Passengers" (starring Jennifer Lawrence and Chris Pratt), a science fiction adventure film from America, arrived on Wednesday to 603 screens around the country; it captured 13.3% (349,120 admissions). "Passengers" has received mixed reviews so far and has recouped $131.6 million from the $110 million it took to produce (the film has been out in America since mid-December). The 3D computer-animated musical "Sing" was up next, down one position to fourth from last weekend's podium finish. With the 183,298 admissions "Sing" claimed over the weekend, 6.5% of the sales, the film's new total in Korea moves onto 1.5 million, or $10.2 million.

The third installment of the Russian "Snow Queen" series of animated films, "The Snow Queen 3: Fire and Ice" by Aleksey Tsitsilin, recently arrived in Korea and managed 170,477 admissions (6%) during its opening weekend, followed by a new local release, Joo Ji-hong's "Because I Love You" (starring Cha Tae-hyun). This is Joo's sophomore film after his 2009 melodrama drama "Maybe" (5,964 admissions), and from the 537 screens allocated, it attracted 5.4% of the sales (145,552 admissions). The critically acclaimed romantic musical from Damien Chazelle, "La La Land", stumbled to seventh from fourth with the 118,969 stubs (4.7%) it scored. "La La Land" (which recently won no less than six Golden Globe awards) has been active in Korea's charts since early December; its bottom line in Korea is now $19.1 million (2.7 million admissions).

South Korean cinephiles have not embraced the latest "Star Wars" film, "Rogue One: A Star Wars Story". Despite entering in second place just before New Years with 523,428 admissions (18%), Lucasfilm's latest plummeted to eighth here with only 90,660 (4.2%); the film is currently around 21,500 admissions short of a million admissions. Park Jeong-woo's "Pandora" was a timely release given the temperature of Korea's current political climate; the film has been out since December 7, and with the 53,744 admissions it claimed over the past weekend, Park's fourth feature has grossed $29.9 million (4.5 million admissions). The final spot in this week's top ten went to Kim Tae-yong-I's new drama: "Misbehavior" (formerly known as "Schoolmistress") starring Kim Ha-neul and Yoo In-young. Kim's fifth film's first weekend had 392 screens to pool from and from them captured 1.8% of the sales (46,355 admissions).