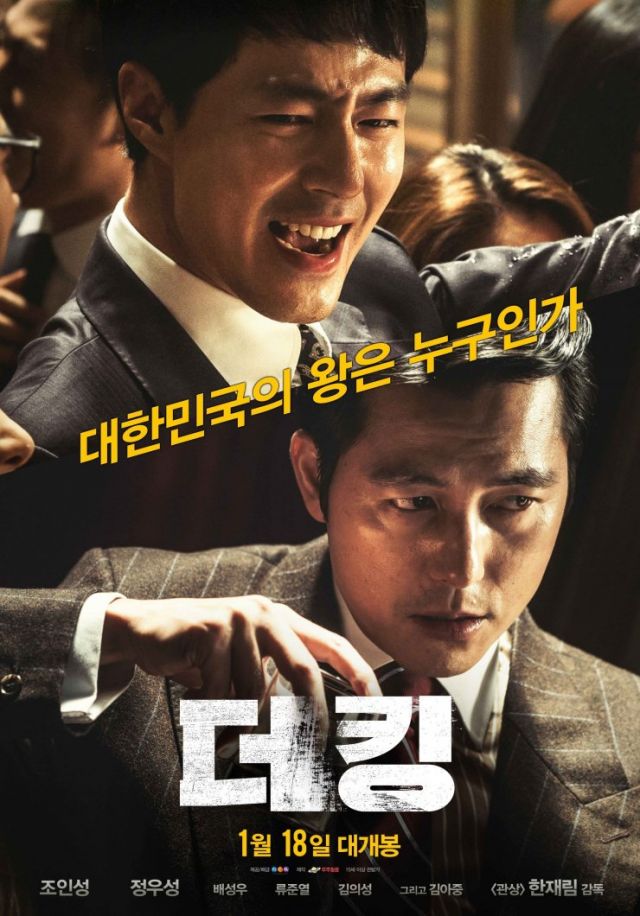 Local films "The King" and "Confidential Assignment" capture 70% of the sales...

"The King" is Han's fourth feature film after "Rules of Dating" (2005), "The Show Must Go on" (2006), and the 2013 hit "The Face Reader". It tells the story of a greedy prosecutor's quest for power and the hard fall that follows. "The King" earned $13.17 million (1.3 million admissions) from 1,310 screens around the country to dislodge last weekend's number, Makoto Shinkai's "Your Name": the highest-grossing Japanese anime in history.

Hong Heon-pyo's action animation "Turning Mecard W: The Revival of Black Mirror" entered the fray last Wednesday and captured 5.79% of the weekend sales (197,204 admissions) from 570 screens. Damien Chazelle's "La La Land" (starring Ryan Gosling and Emma Stone), which won a record seven awards at this year's Golden Globes, moved its total admission count in Korea past 3 million with the 45,923 admissions (1.5%) it scored here. This is "La La Land" seventh week out in Korea since its release early in December last year.

The final two places went to a re-release of the second installment in the "The Lord of the Rings" trilogy, "The Lord of the Rings: The Two Towers" (which went on to grossing $926 million back in 2002), and the Canadian-French drama "It's Only the End of the World" by Xavier Dolan. "The Two Towers" managed 13,055 admissions from just 56 screens (0.63%), while Dolan's award-winning film earned $91,583 (7,360 admissions) from 118 screens. "It's Only the End of the World" won the prestigious Grand Prix and Ecumenical Jury Prize at the 2016 Cannes Film Festival in France and it is Canada's official entry into this year's Oscars in the Best Foreign Language Film.