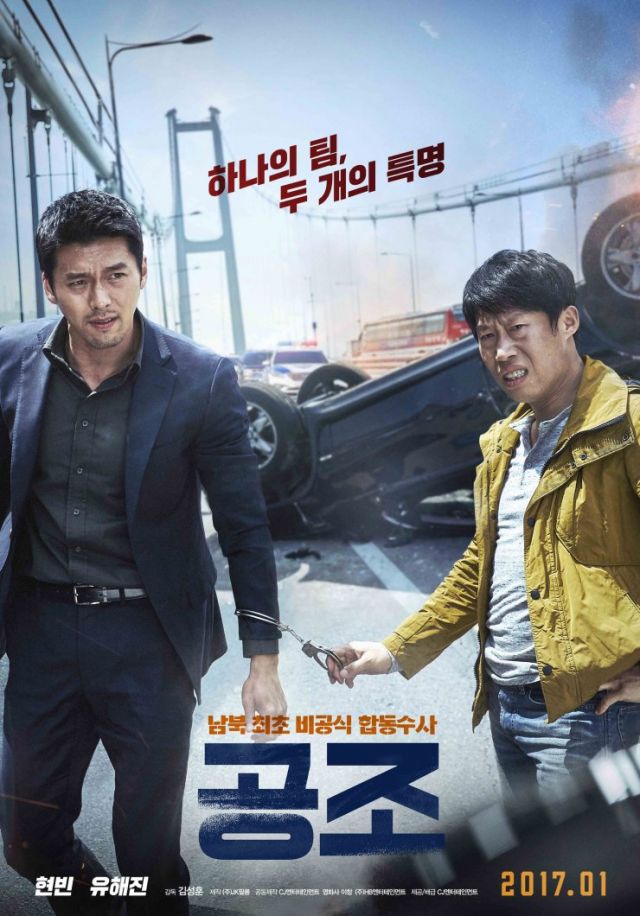 "Arrival", an American adaptation of Ted Chiang's 1998 short story, "Story of Your Life", was the highest new entry this week, but the 298,665 admissions (13.05%) it claimed was not enough to prevent two local flicks from scoring another big one-two finish.

Kim Seong-hoon-III's "Confidential Assignment" and Han Jae-rim's "The King" have occupied the top two spots for three weeks now; the former led the last two weeks, and with the 1,047,947 admissions it claimed here (roughly 45.64% of the sales), Kim's latest's new bottom line moves to $44.8 million (6.2 million)-it's the highest-grossing Korean film of the year.

"The King", starring Jo In-sung and Jung Woo-sung, since losing pole position two weeks ago, managed to perform well in second: despite a loss of around 300 screens, "The King" attracted 17.79% of the sales (409,364 admissions) and is now on the verge of 5 million admissions. While "Confidential Assignment" was able to capture roughly the same percentage of the pie compared to last weekend, "The King"'s share of the sales dipped from 30% (1.24 million) to 17.8%.

Two Oscar-nominated films from America were up next: Denis Villeneuve's "Arrival" (eight nominations) and "Moana" (Best Animated Feature) occupied third and fourth respectively, with the latter hitting the 2-million admission mark thanks to the 171,480 (7%) it attracted over the weekend. This is the fourth week for Disney's "Moana" in Korea and so far Disney's 56th animated feature film has grossed $2.1 million; worldwide, this 3D computer animation has banked $553.3 million (it cost $150 million to produce).

The last film in the Resident Evil film series, "Resident Evil: The Final Chapter", directed by Paul W. S. Anderson and starring Milla Jovovich, fell one place to fifth with 110,006 admissions (4.96%), followed by Makoto Shinkai's phenomenal picture, "Your Name". Shinkai's romantic fantasy had its premiere at the Anime Expo back in July 2016 and started screening in Japan a month-and-half later, but its international release quickly saw it become the highest-grossing anime film worldwide ($330 million, surpassing "Spirited Away"'s $289 million). With the 69,035 admissions it scored over the weekend, "Your Name"'s total tally in Korea now moves onto 3.5 million ($24.9 million).

"La La Land', by Damien Chazelle, won big at 74th Golden Globes (a record-breaking seven wins) and it's nominated in fourteen categories for the upcoming Oscars (another record). Since arriving in Korea back in early December, Chazelle's romantic musical has become somewhat of a permanent feature in the charts; this is the first time in weeks that it's dropped from sixth place, and with the 35,893 it claimed here, "La La Lands" total gross in Korea is now $24.4 million (3.2 million admissions).

The only other new entry was a debut drama by Garth Davis. Like "Arrival", "Lion" is an adaptation, this time of a non-fiction book by Saroo Brierley and Larry Buttrose, "A Long Way Home". The debutant's efforts have also been recognised by the Academy: "Lion" has six nominations including Best Picture and Best Adapted Screenplay. And its first weekend out in Korea yielded 35,356 admissions ($414,500).

"The Lego Batman Movie", a spinoff of "The Lego Movie" by Chris McKay, officially gets released this coming Thursday, but a few screens were open (279) where DC's Legolized hero managed to snatch 28,742 admissions (1.22%). ("The Lego Batman Movie" had its premiere in Dublin late last month and opens in America a day after Korea, February 10.) The final spot in the chart fell to Hong Heon-pyo's 72-minute animation, "Turning Mecard W: The Revival of Black Mirror". This action-packed picture added 18,729 stubs and moved its bottom line to $2.75 million (422,853 admissions).