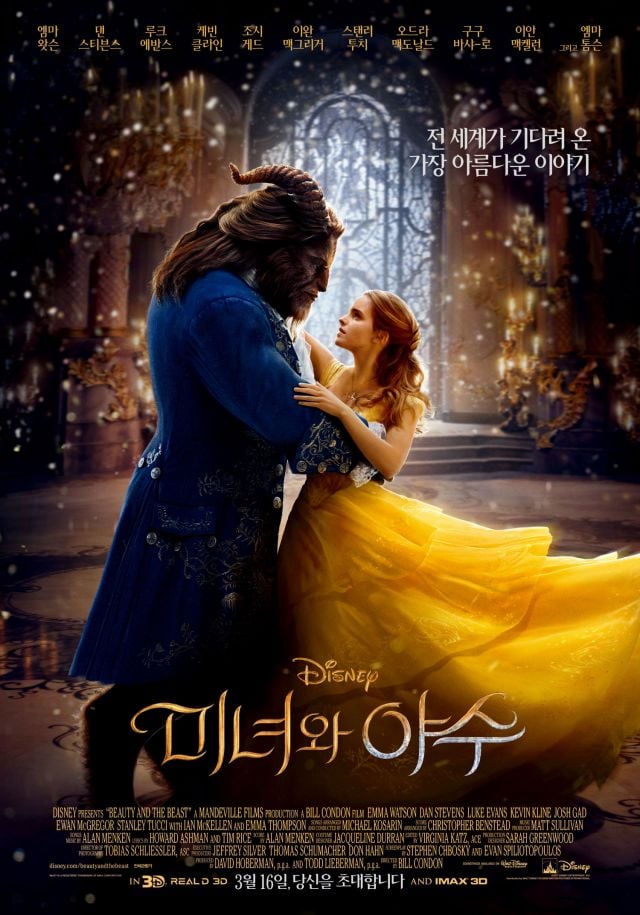 A trio of foreign beasts capture the podium...

A new beast arrived in Korea last Thursday and dislodged "Kong" at the top of the chart. With 66.86% of the box office pie, Bill Condon's musical drama "Beauty and the Beast" (Emma Watson, Dan Stevens) dominated proceedings by capturing 1.4 million admissions ($10.5 million). The film, a remake of Disney's 1991 live-action classic, after having also been recently released in America, has already banked $350 million worldwide (the film was produced for an estimated $160 million).

The latest Marvel superhero film from their X-Men series, "Logan" (starring Hugh Jackman as "Wolverine"), has been out and about in Korea since the beginning of March. "Logan" entered in first place three weeks ago with over 600,000 admissions, but the competition from other beasts meant that its reign was short-lived. In its third weekend out, "Logan" claimed 158,710 admissions (7.66%) to moved its total gross in the Land of the Morning Calm to $15.6 million (2 million admissions). Worldwide, "Logan' has brought in $524.1 million.

The highest local film in this weekend's top ten went to Kim Deok-soo's "Part-Time Spy", starring Kang Ye-won and Han Chae-ah. The film is Kim's second after the 2013 comedy "Dad for Rent" (168,411 admissions) and follows a young woman who climbs the ranks in the National Security Agency while having to stare down corporate corruption and worse. From 496 screens, Kim's sophomore feature attracted 89,262 admissions (4%), marking the watershed in this week's chart as the top three films captured almost 90% of the sales.

One of the big Oscar winners, Damien Chazelle's "La La Land" (Ryan Gosling, Emma Stone), actually returned to Korea's box office after the award ceremony, and it's up one place from last weekend. "La La Land" added another 20,284 admissions (0.96%) from just 156 screens, moving its total gross in Korea to $25.5 million (3.4 million admissions). The film is currently the thirteenth highest-grossing film in Korea this year.

Lee Soo-yeon's crime thriller "Bluebeard" (Cho Jin-woong), her third film since 2003, fell three places to sixth. From 252 screens (less than half it enjoyed last weekend), "Bluebeard" added another 18,827 admissions (0.89%) and moved its earnings to $8.7 million (1.2 million admissions). Not far behind Lee's thriller entered Peter Chelsom's "The Space Between Us", a romantic sci-fi film written by Allan Loeb. Critics and filmgoers have not been kind to Chelsom's latest-the film has only recouped a little over a third of the $30 million it took to produce-and its first weekend out in Korea yielded just $116,115 (16,401 admissions: 0.73%).

From "The Space Between Us" to "The Light Between Oceans" now as Derek Cianfrance's romantic drama slips one place to eighth with 10,309 admissions (0.47%). Nah Hyeon's directorial debut "The Prison" will only be officially released later this week, but 43 screens around the country were enough to see the film secure a top ten finish with 9,492 admissions (0.48%). This weekend's final entry, Kim Tae-yoon's "New Trial", is currently the fifth highest-grossing film in Korea in 2017 with 2,4 million admissions to its name, 8,825 (0.41%) of which came from this past weekend from 141 screens; the film was released mid-February.