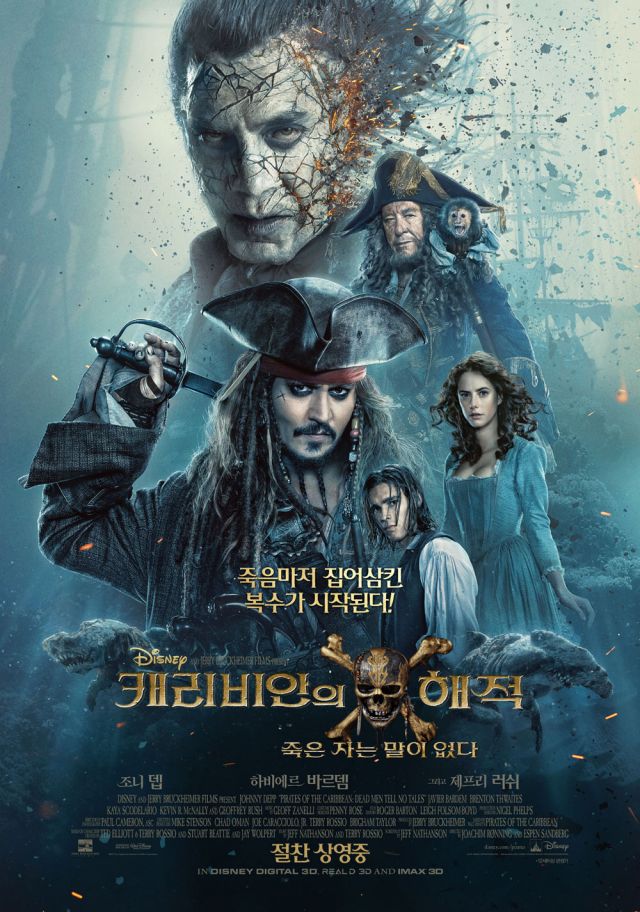 Disney's Pirates and "Our President" rule the roost...

The fifth instalment of Walt Disney's "Pirates of the Caribbean"-"Dead Men Tell No Tales", by directors Joachim Rønning and Espen Sandberg-arrived in Korea last Wednesday. From 1,328 screens around the country, producer Jerry Bruckheimer's latest spectacle captured 48.41% of the sales during its opening weekend. The 1.1 million admissions ($8.9 million) the film scored is the highest weekend take for the month of May, and the film is also the fourth consecutive foreign feature to enter in first in as many weeks.

The highest local entry went to "Our President", a 109-minute documentary by Lee Chang-jae. Lee's fourth feature attracted 510,167 admissions (20.57%) from 774 screens and was followed in third by Jordan Peele critically acclaimed directorial debut, "Get Out" (starring Daniel Kaluuya and Allison Williams). "Get Out", an American horror, entered the fray last weekend in first place with 39% of the sales (802,974 admissions). With the 402,607 admissions (16.44%) Peele's debt scored this past weekend, the film now moves its bottom line in Korea to $12.6 million (1.7 million admissions).

"Guardians of the Galaxy Vol. 2" went straight to number one when it arrived in Korea May 3, but quickly fell to fourth the following weekend. For the past two weekends, however, Marvel's latest have steadily occupied seventh. Last weekend it did so with 129,651 admissions (6.21%), but it took just 22,264 (0.91%) to claimed the same position here. With its 2.7 million admissions ($20.8 million), "Guardians of the Galaxy Vol. 2" is currently the seventh highest grossing film of the year, just behind "The Prison" ($21.2 million) and the Japanese blockbuster "Your Name" ($25.9 million).

Kim Hyeong-joo-II's "The Sheriff In Town" (starring Lee Sung-min, Cho Jin-woong and Kim Sung-kyun), his directorial debut, added 20,773 admissions (0.82%) from a dwindling screen count to move its total tally to 2.5 million ($18.5 million). Not far behind, and down an impressive six places from last weekend, was Guy Ritchie's epic fantasy "King Arthur: Legend of the Sword" (Charlie Hunnam) on 20,035 (0.76%). "Alien: Covenant", Ridley Scott's sequel to his 2012 film "Prometheus", entered in first mid-May, but two weeks later the sixth instalment in the popular "Alien" series of sci-fi horror films is teetering in tenth with 15,804 admissions (0.63%).