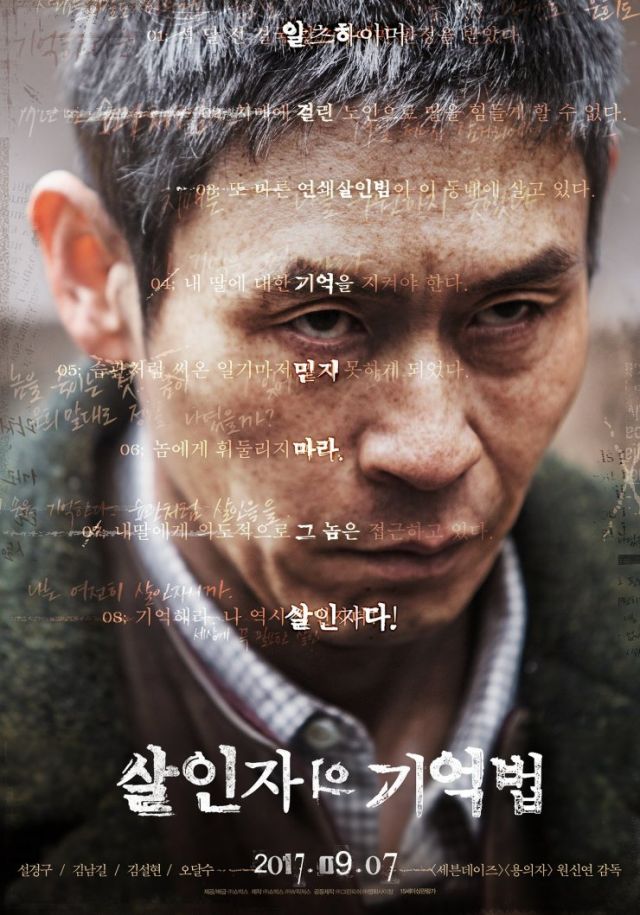 "Memoir of a Murderer" retains pole position ahead of "Baby Driver"...

The American action thriller "Baby Driver", now director Edgar Wright's highest-grossing film, failed to overtake local thriller "Memoir of a Murderer" during its first weekend out. It was a close race, but "Baby Driver"'s 338,213 admissions (22.35%) was not enough to deny Won Shin-yun's new thriller a second straight weekend at the top.

From 884 screens, down from 1,064, "Memoir of a Murderer" added another 483,855 stubs (31.68%), pushing its total tally now over the 2 million admissions mark. Since its release two weeks ago, the film, which stars Sol Kyung-gu, Kim Nam-gil and Seolhyun (as well as veteran actor Oh Dal-soo), has banked $14.8 million. "Baby Driver" had 777 screens nationwide to pool from, and despite the critical acclaim the film has received overseas, it was not enough to disrupt Won's fifth feature ("The Wig", "A Bloody Aria", "Seven Days" and "The Suspect") at the top. Worldwide, and from a production budget of $34 million, "Baby Driver" has so far earned $214 million.

"American Made", Dough Liman's bio pic about Barry Seal (played by Tom Cruise, a very popular actor in Korea) and his undercover work for America's Drug Enforcement Administration (DEA), opened its Korean account with 216,589 admissions (13.93%), or $1.9 million. The film marks Liman's return to filmmaking; his previous film, "The Bourne Identity", was released a decade and a half ago. Up next was Andy Muschietti's modern adaptation of Stephen King's epic novel, "It". "It" has already made ten times its production budget of $35 million, and week two for King's classic clown in Korea saw it add another 119,258 admissions (7.73%), moving its bottom line now to $5.9 million.

The American action comedy "The Hitman's Bodyguard" entered in first three weeks ago, fell to third with the arrival of "Memoir of a Murderer" and "It", and now sits in fifth with 116,656 admissions (7.9%). Since its release late last month, Patrick Hughes' 'blacklisted' film (Tom O'Connor's screenplay for the film was on Hollywood's list of the best-unmade films in 2011, the 'Black List') has grossed just under $6 million in Korea alone and $130.6 million worldwide. "A Monster Calls", a dark fantasy flick by Spanish director J. A. Bayona, was the last new release to make it into the top ten this week: from 349 screens, "A Monster Calls" attracted 36,298 filmgoers (2.28%, or $261,129) to claimed sixth place.

The highest-grossing film of the year was next. Jang Hoon's "A Taxi Driver" (starring Song Kang-ho) has been amassing admissions since early August. Now enjoying its eighth weekend out, "A Taxi Driver" currently stands on 12.1 million admissions ($84.7 million), 34,604 of which came from this past weekend. Other top films released in Korea this year include "Confidential Assignment" ($56.5 million), "Spider-Man: Homecoming" ($52.4 million), and "The Battleship Island" ($44.7 million).