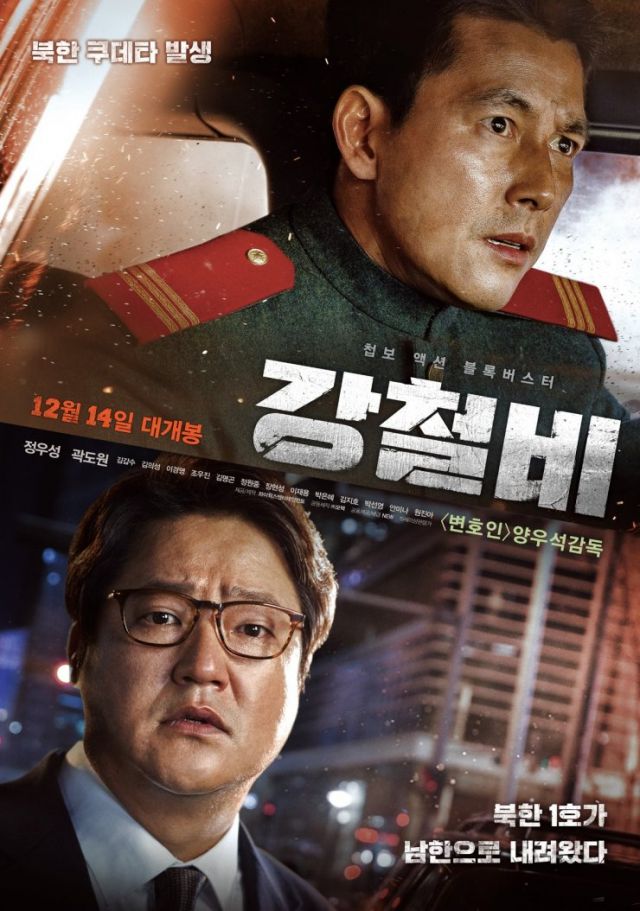 "The Last Jedi" no match for timely "Steel Rain"...

Based on his own webtoon from 2011, Yang's timely spy thriller follows a former North Korean agent and a high-ranking Foreign Affairs and Security chef from the South as they conduct a covert mission to prevent another Korean War from breaking out. From 1,389 screens, "Steel Rain" claimed 54.78% of the sales (1.3 million admissions), roughly $10.4 million.

Rian Johnson's "The Last Jedi" is the second film in the modern Star Wars trilogy after "The Force Awakens" (2015). The film had its world premiere two weeks ago in Los Angeles and arrived in Korea last Thursday to over 1,000 screens (300 less than "Steel Rain"). "The Last Jedi"'s first weekend out in the Land of the Morning Calm yielded 522,833 admissions (22.42%), or $4.2 million. Together, the top two films claimed 77.2% of the sales.

Korea's favourite little penguin Pororo remained in third with 178,058 (6.61%), followed by the equally unmoved Japanese fantasy anime "Mary and the Witch's Flower" by director Hiromasa Yonebayashi with 98,718 (3.62%). "Mary and the Witch's Flower" is based on the British writer Mary Stewart's book "The Little Broomstick" and was released in Japan in July where it made $28.8 million. With this weekend's admissions tallied, "Pororo, Dinosaur Island Adventure" and Yonebayashi adaptation's bottom lines move to $1.2 million and $692,248 respectively.

"Forgotten", a local mystery thriller by writer-director Jang Hang-jun, his fifth film since "Break Out" (2002), fell three places to fifth with 84,839 admissions (3.3%). This is the third weekend out for Jang's latest and so far it has claimed 1.3 million admissions ($9.5 million). Last weekend's number one, "The Swindlers" by Jang Chang-won, currently the eleventh highest-grossing film this year, plummeted to sixth during its fourth weekend out after spending three weeks in a row at the top of the chart. From 529 screens, down 327, Jang's heist film added another $587,554 (78,048 admissions: 3%) to bring its total take now to $28.5 million (3.9 million admissions).

Two new foreign films were up next in seventh and eighth: the movie edition of popular Japanese fantasy series "Rilu Rilu Fairilu" claimed 35,669 admissions (1.34%) from 207 screens, while the historical drama "Tulip Fever" (based on Deborah Moggach's novel) found 22,409 admissions (0.91%) from 359 screens.

"Murder on the Orient Express", Kenneth Branagh's modern adaptation of Agatha Christie's famous 1934 novel, fell four places to ninth in its third weekend, claiming another 16,079 admissions (0.63%) and moving its total gross to $6 million (855,662 admissions); worldwide, and from a production budget of $55 million, Branagh's take on this classic mystery has earned just under $300 million. The final place went to Dorota Kobiela and Hugh Welchman's "Loving Vincent", an award-winning animation film about the famous Dutch post-impressionist painter. The film has been active in Korea's top ten since early November, and the 11,765 admissions earned here bumped its total tally to 352,591 (or $2,5 million).