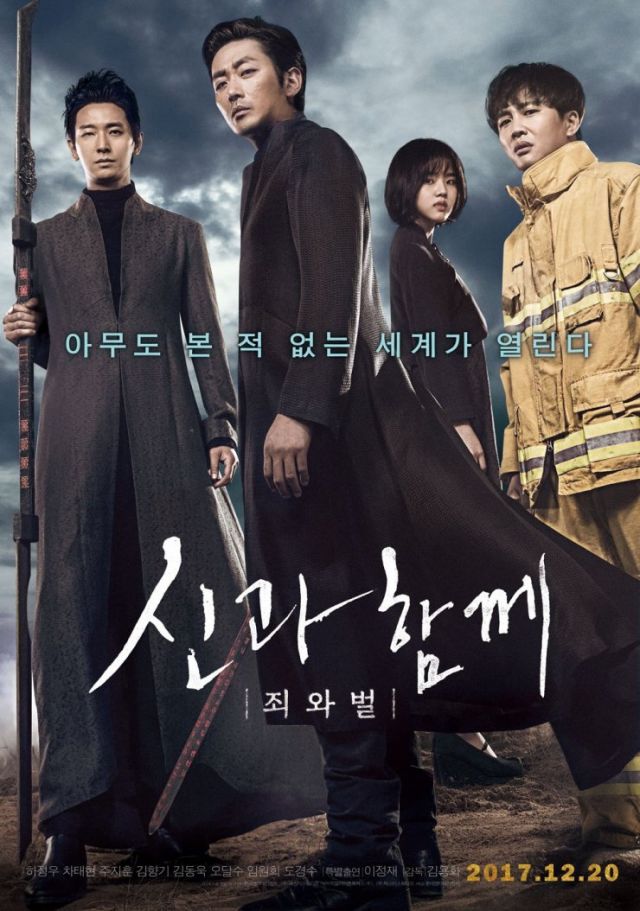 The last weekend of 2017 saw another massive win for Kim Yong-hwa's "Along With the Gods: The Two Worlds", the first in a series of films adapted from Joo Ho-min's webcomic "Singwa Hamgge". Kim's fantasy drama entered the fray three days before Christmas and found massive support during its first weekend out. Its second weekend out was equally profitably: from 1,666 screens, down from 1,887, "Along With the Gods: The Two Worlds" added another 2.4 million admissions (53.73%) and has raced to become the second highest-grossing film of the year. Currently, Kim's much-anticipated film has grossed $64.2 million (8.5 million admissions).

Director Jang Joon-hwan's new film is about the murder of student activist Park Jong-cheol during the political turmoil of the late 80s. "1987: When the Day Comes" (with Kim Yun-seok, Ha Jung-woo, Yoo Hae-jin, and Kim Tae-ri) hit local screens last Wednesday and claimed 1.3 million admissions, or 29.61% of the sales ($10.6 million). Jang has directed three other films since 2003: the cult sci-fi hit "Save the Green Planet", "Camellia" and "Hwayi : A Monster Boy".

Last weekend's number two, Yang Woo-seok's "Steel Rain", another K-webtoon turned feature, took a step back with the arrival of "1987". Despite losing 400 screens, "Steel Rain" scored 291,426 admissions (6.26%) and once again outperformed Michael Gracey's "The Greatest Showman" (Hugh Jackman) as it hit the 4 million admissions mark (roughly $30 million). The 139-minute war drama ended the year as the ninth highest-grossing local film overall. Gracey's period musical, which was released the same week as Kim's leading adaptation, added 147,414 admissions (3.24%) across 412 screens (down from 702), and was trailed by the latest Pokémon movie.

"Pokémon the Movie: I Choose You!" by director Kunihiko Yuyama grossed $33.5 million in Japan back in July; in Korea, since its released two weeks ago, the film has made $2.9 million, $627,679 (87,453 admissions) of which came from this past weekend. The animated monster mash-up "Monster Family" earned 1.29% of the sales (65,678 admissions) during its second weekend out, and the American drama "Wonder" by Stephen Chbosky recently arrived and found 53,872 admissions (1.15%) from just 178 screens. Chbosky's film, which has already grossed ten times its production cost of $20 million, is an adaptation of R. J. Palacio's multi-awarding winning children's book of the same name.

Local animation "Pororo, Dinosaur Island Adventure"'s fourth weekend out yielded 36,733 admissions (0.75%) for eighth, followed by a new animation from Japan, "PriPara: Everyone's Longing! Let's Go PriPari!", based on the popular arcade game by Takara Tomy, with 21,294 (0.43%). The final weekend top ten of the year was rounded out by "The Last Jedi". The second film in Star Wars sequel trilogy has grossed over a billion dollars internationally, but Korean filmgoer's contribution to that sum has not been significant. "Star Wars: The Last Jedi" has fallen from second to sixth to ninth since its release mid-December, and the 11,533 admissions it earned here was not enough to push the foreign blockbuster past the million admissions mark.