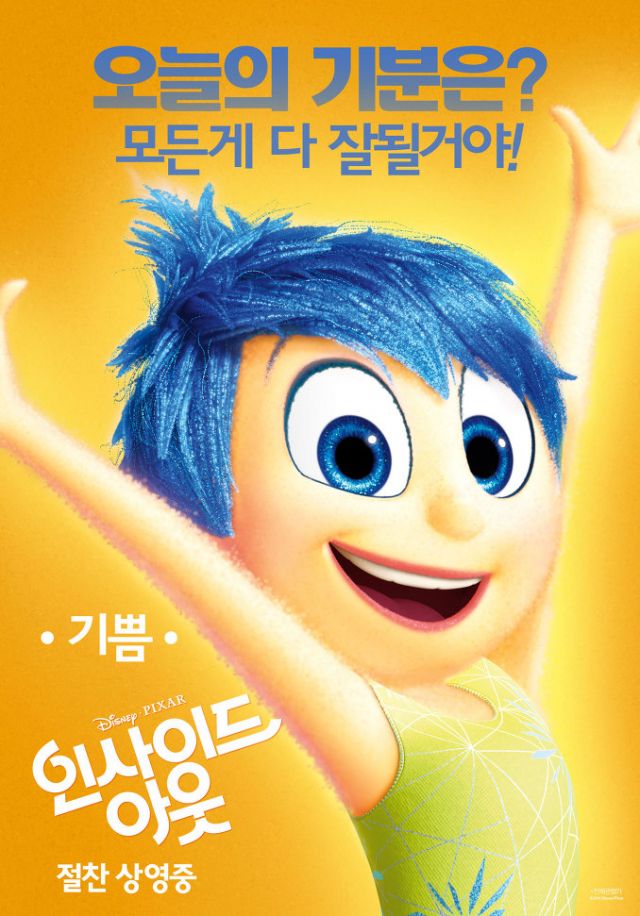 Last week Disney and Pixar's "Inside Out" entered the fray to settle in second with 21% of the box office pie; this weekend, however, saw the popular animation clinch the top spot by outperforming Kim Hak-soon's "Northern Limit Line" by almost most doubling its efforts. "Inside Out" claimed 939 thousand admissions over 931 screens (35%) to top the chart over the weekend, bumping Kim's war drama down a place with its 530 thousand admissions (19%). Worldwide, "Inside Out" has been extremely well-received having now banked over $490 million.

The American action comedy "Pixels" (starring Adam Sandler) was recently released in Korea and attracted 400 thousand during its first weekend out. Chris Columbus' quirky flick took third place, and along with one and two, the top three performers captured 67% of all tickets sold. Another foreign film that has enjoyed a good run is the latest in the "Terminator" series of films: Alan Taylor's "Terminator Genisys". "Terminator Genisys" was released at the beginning of this month and has since amassed over $22 million (3 million admissions), 260 thousand admissions of which came from this past weekend. Not far behind that sci-fi favourite fell the American horror "Insidious: Chapter 3", which claimed the attention of 224 thousand across 419 screens around the country. This is the second weekend out for Leigh Whannell's film, and since its release on the 9th the film has accumulated 645 thousand admissions from the South Korean moviegoing public.

The record-breaking "Jurassic World" has impacted box office history by attracting viewers in incredible numbers, and in a very short space of time, and currently stands as the fourth highest-grossing film ever made. It achieved that feat by earning over $1.5 billion worldwide, and it's still going. In Korea, "Jurassic World" has performed well, and since its release during the second week of June the film has made over $41 million (roughly 5.5 million admissions). Week six for this prehistoric romp was, expectedly, less spectacular than its initial roar, and so the June giant has now slipped to sixth with 101 thousand admissions (2.8%) going its way.

In seventh came the South Korean fantasy thriller "The Piper" by Kim Kwang-tae. Kim's interesting horror was released two weeks ago and featured as high as fourth in last weekend's chart. However, its strong opening was dampened by its sharp decent here towards the wrong end of proceedings. "The Piper" captured just 2.9% of ticket sales (77 thousand admissions), and will now struggle to hit that million admissions mark in the coming weeks. Local films have not had it all their own way this year, and another local film that's hoping to make an impact is Kim Sang-jin's comedy "Three Summer Nights". "Three Summer Nights" stars Kim Dong-wook, Im Won-hee and Son Ho-jun in a film about three men who get into some serious trouble during a night of heavy drinking (sound familiar?). It attracted 36 thousand (1.4%) during its opening weekend, a disappointing start to be sure, and just managed to outplay Gilles Paquet-Brenner's "Dark Places" (32 thousand admissions) for eighth place. Lastly, the third weekend of July 2015 was rounded out by Simon Curtis' "Woman in Gold" (which had its premiere earlier this year at the 65th Berlin International Film Festival), and stars Helen Mirren and Ryan Reynolds. The film is based on the life and times of Maria Altmann and her struggles with the authorities over the iconic painting of aunt in the "Portrait of Adele Bloch-Bauer I". "Woman in Gold" attracted 16 thousand to its screens (84) to close out this weekend's list of Korea's favourite flicks.