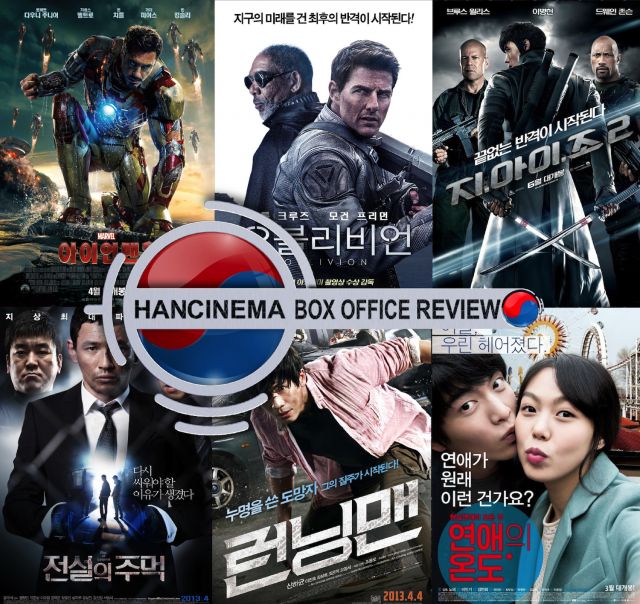 April proved to be a slow month at the box office as local films gave way to foreign favourites. It wasn't until last weekend that things were given a shot in the arm as Marvel's blockbuster "Iron Man 3" sounded the horn that cause more than 2 million fans to stream in. Tom Cruise's latest efforts in "Oblivion" held down the top spot during the middle weeks, leaving Jo Dong-oh's "Running Man" to be the only Korean film to taste gold in week one. The release of both "Oblivion" and "Iron Man 3" denied Kang Woo-seok's eighth film "Fist of Legend" any traction, leaving to sit in second place spinning its tyres for much of the month.

Week one saw "G.I. Joe 2" step back and replaced by the action thriller "Running Man", despite having more screenings. "G.I. Joe 2" stars the popular Korean actor Lee Byung-hun who plays "storm shadow" in this science fiction action flick and his role in the film was appreciate as the film sold more than 1.8 million tickets. Jo Dong-oh's "Running Man" (starring Shin Ha-kyun, Lee Tae-ri and Kim Sang-ho) opened its account with 501,908 admissions and first place in week one, but over the next three weeks was only able to advance its tally to 1,377,257. "Running Man" is Jo's second feature film; his first came back in 2006 with "The Restless" (which he also wrote the screenplay for and claimed 1,429,129).

The romantic melodrama "Very Ordinary Couple" is Roh Deok's debut film and she would be pleased by the positive response from fans and critics alike. Roh first walk in the park claimed 1,863,907 admissions during its five-week run in the top ten, but slipped out of the list just last week. Yoon Jong-chan's fourth film "Paparoti" was out of favour by the third week of April, but not before an unusual screening at JIFF 2013, and 1,714,803 ticket stubs in bank. The month of April also saw two Korean giants end their impressive run. Lee Hwan-gyeong's "Miracle in Cell No.7" had an incredible eleven-week spell in the top ten; hauling in a record-breaking 12,805,101 admissions! Park Hoon-jung's "New World" remained the third highest grossing Korean film of the year, bringing in 4,680,726 admissions during its eight-week run.

O Muel's "Jiseul" fell away at the end of March, only to return briefly in April's second week, making away with 129,379 admissions in all. Choi Seung-ho's second feature "Norigae" struggled to make waves, it came in at four (80,337) but quickly slid to tenth last weekend (14,213). "Noriage" will mostly likely be ejected from the top ten this coming weekend, but as it stands now the film has amassed 158,018 admissions (Choi's debut film, the documentary "Fantastic Modern Gayagumer", had just 136 admissions).

There were a few international animations that also came into the fray. The Norwegian film "Ploddy The Police Car" had over 50,000 admissions and "Pinocchio" was sixth last week, making its total count 37,117. Two Japanese films also weighed in last weekend. "Evangelion: 3.0 You Can (Not) Redo" and "Crayon Shin-chan: Arashi o Yobu! Ora to Uchu no Princess" are on 32,785 and 78,692 admissions respectfully.

"Iron Man 3" will mostly likely continue its reign this coming weekend, as the film has already shot to being the fourth highest grossing film of year with 4,264,132 admissions. Kang Woo-seok's "Fist of Legend" was still stuck in second last weekend, but has advanced its tally to 1,543,058. Let's see how the local flicks handle the pressure from the foreign flicks in the month of May, and remember to keep an eye on HanCinema.net for all your movie and drama updates!