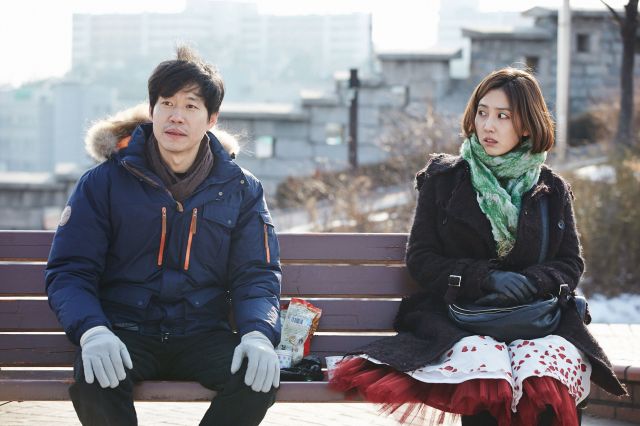 Yeon-shin (played by Shin Dong-mi) is a struggling actress who's just about completely run out of patience with her latest job, which appears to be managed by a guy who has absolutely no idea how staged theater is supposed to work. Forced to face the fact that her lifelong dreams of becoming an actress are unlikely to ever come to fruition, Yeon-shin instead faces inward, analyzing the literal dreams of her sleeping hours, seeking to find some evidence of past regret that's influencing the general malaise of her life right now.

"A Matter of Interpretation" comes courtesy of director Lee Kwang-kuk, who also made "Romance Joe" from a couple of years ago. And this film, too, is more about a general gimmick than it is any specific point. The practical utility of dream interpretation is called into question almost immediately as soon as it's brought up. Why yes, dream analysis has provided no measurable benefits to my personal situation, but let's do it anyway.

What makes the concept more interesting here is that dream interpretation works in this story mainly as a cipher. It's obvious that Yeon-shin and her ex-boyfriend Woo-yeon (played by Yu Jun-sang) are unhappy in life. Whether the dream interpretation actually has anything to do with identifying these problems is beside the  point. Yeon-shin and Woo-yeon both want answers, and the very fact that they can remember their dreams in the first place is a pretty good clue that they don't have anywhere better to look.

I particularly liked the dream sequences themselves, which are mostly boring and incomprehensible, but are just specific enough that they appear to be harboring some kind of mysterious hidden knowledge. The relationship any of this stuff has to the real world is, at best, dubious. At one point a character discovers a car in the real world of the same make and model as the one that shows up in the dreams. This is not, in fact, as relevant as it sounds.

The framing device of dreams as a whole also does a decent job disguising the almost complete absence of any actual story. One character simply disappears halfway through the movie on account of having a serious job. This makes for a bit of an interesting snipe at the narcissism of people involved in creative fields in general. Such persons often like to think they have deep problems and wise insights, but as seen in the beginning, all Yeon-shin has to show for this is a large circle of mostly unhelpful friends she never actually sees. Hence the appeal of dream interpretation.

Ultimately "A Matter of Interpretation" is a bit lacking on substance, but this movie is a nice enough dose of charming weird that I didn't mind it so much. Even if the movie is very creatively pretentious, the execution is greatly helped by the fact that the characters themselves only come off that way in their worst moments. By a wide margin, the most charming and inwardly reflective moments are the ones that involve a child's artwork. If we can waste this much time out of the day analyzing dreams, surely there's enough left over to appreciate something from someone else's imagination.