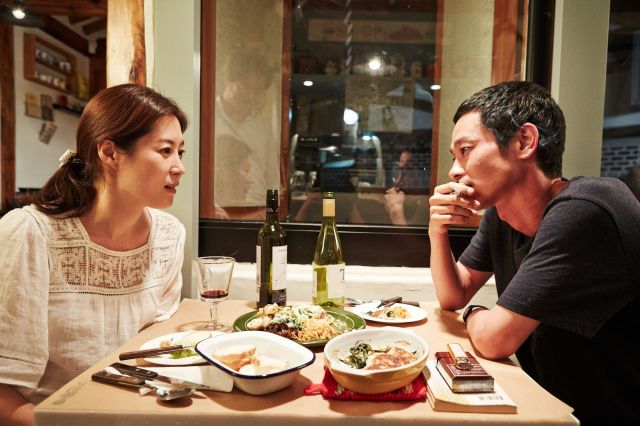 Worldwide today English is frequently used as the lingua franca among educated gentry from different countries. Do love the irony of the fact that apparently we had to borrow that term from the Italian. Anyway, while this means there's quite a few people in the world who can speak English, relatively few of them can actually speak it well, and an even greater portion end up using the language stiffly, awkwardly, and repetitively in execution, resulting in conversations that sound, well, a mite bit odd.

That is the entire joke behind "Hill of Freedom". Nearly every single scene is framed around one such conversation, and the longer the film goes on, the more obvious it is that when non-native speakers use English they use it in a way that is fundamentally different from how they use their native tongues. This is made most clear in one scene where one Korean character tries to engage another Korean character in their native language, using the exact same conversational style that we've seen used with English, and the results turn out comically violent.

A lot of directors, the longer their career goes on, have a habit of making films that are inscrutable to anyone but themselves. Hang Song-soo certainly falls into that dynamic here. The population of people that can actually really get what's going on here is pretty small. It pretty much requires not just that you know a second language, but that you have known it imperfectly enough that you know what it's like to practice with complete strangers, even if you're normally fairly introverted.

As it turns out, though, I fall into that category. And I'm willing to bet a fair number of you readers do, too, given that HanCinema's audience is dispersed all over the planet. Weirdly enough, this might actually be the best possible introduction to Hang Song-soo for you. While nearly all of his films are about awkward, uninspiring gentrified small talk, "Hill of Freedom" exposes this conceit at the most basic possible level. There's barely even any subtext. All the characters have to be as explicit as possible in what they say because their English isn't good enough for them to try to be subtle.

From a scenic standpoint, too, it may be worth watching "Hill of Freedom" simply for the backdrop. All of the action takes place in Bukchon village, an area in the northern part of Seoul that's covered in traditional style Korean houses and boasts an excellent location relative to Seoul's major tourist sites. It's easy to fixate on the grandeur in this type of trip, but "Hill of Freedom" is about the day to day life of such a visit. Simple houses, simple meals, coffee shops- normal stuff, just in old-looking buildings.

Like all trips though, this one comes to an end, and thankfully "Hill of Freedom" is only a bit more than an hour long. Don't get me wrong- this is good stuff, it's just there's only so far you can take the central joke before it becomes a bit tired. The only other gimmick of note here is the film's odd framing device- which I'd just as soon not ruin here in this review, since a lot of the fun just comes from trying to piece the puzzle back together by yourself.

"Hill of Freedom" is directed by Hong Sang-soo and features Ryo Kase and Moon So-ri.