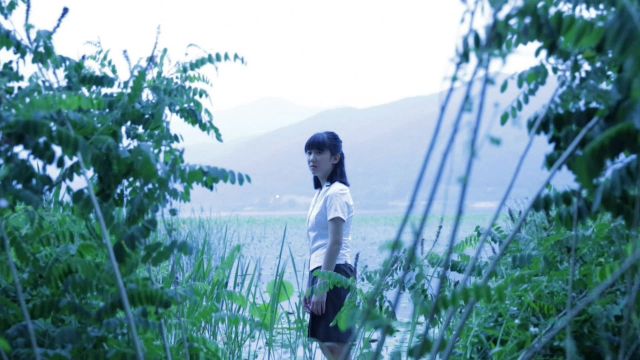 Eun-ah (played by Choi Jeong-won-I) is living in the past while her husband Sang-hyeon (played by Jang Hyun-sung) is living in the present. That's not a metaphor, I think. It's just an unnecessarily confusing framing device that took me way too long to figure out. Most viewers could be forgiven for not even realizing that these two are married, considering how little screen time they have together.

This might have been intended as social criticism- goodness knows "Love Never Fails" is loaded with it. Eun-ah pressures their daughter So-won (played by Jung Da-bin) heavily to succeed, constantly insisting that only a top class student has any hope of being able to make out a happy living in the modern world. Meanwhile, Sang-hyeon, the successful doctor, is stressing out because his having a high-tier career isn't enough to make people change their perceptions of reality just to suit his mood.

There's frequently a perception in fiction that maybe the proles have it better off than those of us in the more well-to-do educated classes, who constantly worry about the system even if we don't have to. "Love Never Fails" explicitly gives us an example of this as well with a parallel family, one that has more trouble making ends meet, yet who actually treasure the time they spend with each other instead of agonizing about it.

While all of this is fairly clearly telegraphed, this also has the unfortunarte consequence of oftentimes making the film feel a bit trite with its meta-theorizing about the nature of happiness. At the end we do in fact see that "Love Never Fails", but the journey as a whole is an unpleasant one mostly because there's surprisingly little focus on the actual relationship that needs to be salvaged.

This isn't the first story about marriage director Min Byeong-hoon has told where the couple doesn't actually meet. "Touch - 2012" had a very similar dynamic, and was in many ways the same kind of depressing film. All the same, I found its overall message of the faint glimmer of hope at the end of an uncaring relapsing world to be more convincing. There the characters were struggling just to survive. Here we're supposed to have some faith in their ability to recover.

Still, on general technical merits "Love Never Fails" is a pretty good piece. It's just such a basically distressing story that I'm not really sure who the intended audience is supposed to be. I suppose it might be nice to realize that, even if we're oftentimes awful people who snap at the ones whom we love, and don't really know how to be happy with our own lives, that by the end "Love Never Fails". As a precautionary tale the film has some pretty good ideas about how we should not treat kids and taxi drivers. It's not much, but it's enough.