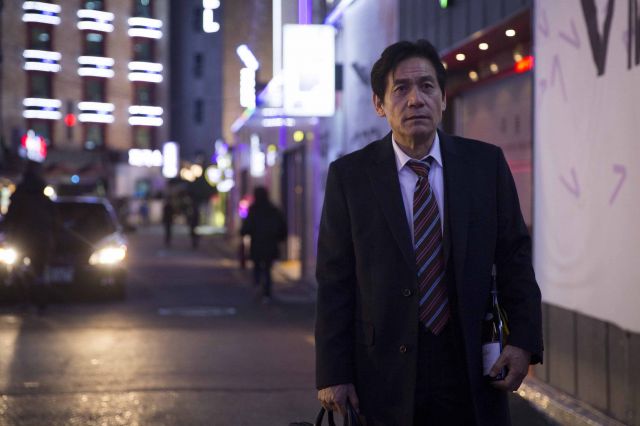 Sang-moo (played by Ahn Sung-ki) is an old, apparently passionless man who somewhat incomprehensibly makes his living running the advertising section of a major cosmetics firm. His weary, tired voice is an odd contrast to the way he dramatically insists that customers must be convinced this product will grant them the glory and rejuvenation of youth beyond all wildest fantasies.

"Revivre" is a character study. It uses a familiar prompt to explore the question of how well we can really know a person. The basics of the film's narrative structure seem to bear out a predictable sort of wish fulfillment. Sang-moo's wife (played by Kim Ho-jung) is dying, and during this time a new employee catches his attention. Eun-joo (played by Kim Gyu-ri) is in her mid-thirties, physically attractive, friendly, outspoken, and a capable worker.

They key to unraveling "Revivre" is to realize that the basis of Sang-moo's attraction to this woman is based on a fundamental combination of all five of those variables. It's not so simple as a traditional romantic narrative- note that throughout the course of the film, Sang-moo barely even talks to her outside of a professional capacity. There is much more going on beyond the surface of his emotions than what's let on.

It's here that the conceit of Sang-moo's cosmetic profession takes on its strongest hue, because in parallel to the story involving Eun-soo are the last days Sang-moo spends with his wife. Notice the intimacy and care with which he manages jobs that, as others are quick to remind him, the nurse is perfectly capable of doing in his stead. It's mentioned at one point that Sang-moo doesn't even seem to like his wife all that much, so what's with all the devotion?

The answer is, quite simply, that we don't know him as well as we think. This isn't all that surprising, given that "Revivre" is just a movie with characters we know straightaway we're not going to see that long. But the film takes on much deeper undertones when taken in the context of the human experience. How well do you really know your parents? Sure they might have raised you, but is it possible something else was going on there that you never even noticed, because it didn't occur to you to think of them that way?

The deep abiding personal love that Sang-moo is capable of rings a sharp contrast to the reality of his working life. It would be tragic except that, you know, this is all just life. Actual, meaningful intimacy isn't just whispering sweet nothings. It's saying sweet nothings, clearly and out loud, to someone who won't judge you for speaking when silence is supposed to be golden. This is how it becomes all too clear by the end of the film that we can only ever hope to have what Sang-moo did in his life. Maybe that's why he's so good at his job. Sang-moo can create the desire of youth without meaningfully tempting himself, and that's a maturity that can't be taught.