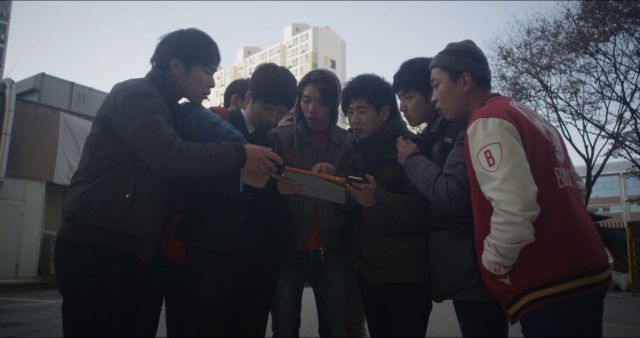 Ha-yeong (played by Ha Yoon-kyung) is a young woman who has made a reputation for herself online as a particularly vicious slanderer. Once Ha-yeong finds a target she doesn't like, she's ruthless and relentless about bringing them to justice. Of course, a lot of the time she's just slandering people viciously for no good reason. Consequently, when Ha-yeong finally goes a step too far, a posse forms to storm her house and then, well, then things get messy.

That's the set-up behind "Socialphobia", as the surviving members of this encounter struggle to discover the truth behind Ha-yeong and make sense of the person who died inside her house. It's an exciting, epic quest as well befits a posse of young men who got connected in this online universe to try and make a difference in the world and stop the bad guys. Sure, their intentions toward Ha-yeong were hardly benign, but what happened couldn't possibly be their fault.

Well, actually yes it can. I really liked how when the investigation team forms, right away one of the guys just says, you know, maybe the situation is exactly what it looks like? Certainly, the police aren't interested in any more than the basic cursory explanation, and the investigation team members start to give up as time goes on. They learn all sorts of stuff about Ha-yeong, but almost none of it can explain what happened at her home that night beyond what they already knew.

Director Hong Seok-jae livens up the proceedings by giving us lots of social media vision- not just the various screens the characters look at through their investigations, but also as a sort of ambience. There's so much visual material in terms of various texts, messages, and boards that it can't even all be translated without completely ruining the visual aesthetic. If you're not Korean, you'll just have to guess what's being said. Not exactly a difficult feat- it's not like there's a lot of variation between all the various white noise.

It's a central irony of the film that befits its main flaw- how the various characters have little in distinguishing personality traits save for Ha-yeong. Which makes sense, really. In many ways they've sublimated all pretext of individuality for the sake of their online identities. Everything, from the assault on Ha-yeong's home to a similar attack later on have been painstakingly filmed to entertain the unknown always commenting viewer audience.

The result is a commentary on new media similar to what was seen earlier this year with the first segment of "MAD SAD BAD". In "Socialphobia", though, for better or worse, the scale is a lot more epic. The characters aren't just acting for an audience- they genuinely believe that as young people in a hyper-connected world with excellent access to all sorts of high-tech invesigation techniques, they have the best chance at getting to the truth. And therein lies the exact problem with that kind of arrogance. When searching for the truth, you may not like what you find.