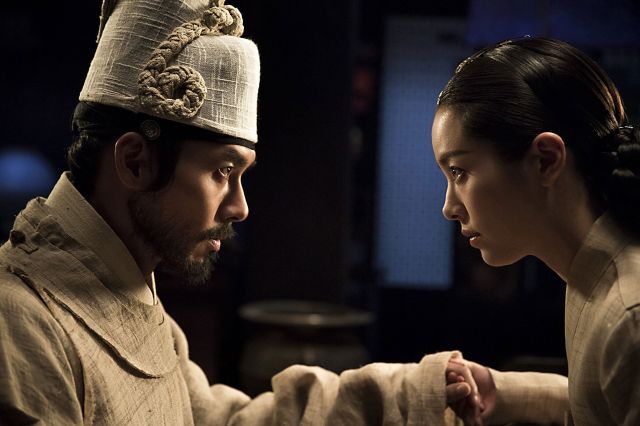 From the film's very bleak, poorly lit opening, the tone is very clearly set that "The Fatal Encounter" has no intention of being a happy uplifting movie about the triumph of good over evil during a very dark time in Korea's history. Without ruining too much of the ending, it's really more of a triumph of general disgust over evil, because why would anyone need that much evil can we at least not murder children. Is that too much to ask? King Jeongjo (played by Hyun Bin) is less a beacon of hope so much as he is the only guy in the movie with a more noble motivation than just bolstering the people who like him.

In spite of this, though, "The Fatal Encounter" manages to eschew any particularly obvious parallels regarding politics back then and politics now. Nobody really learns anything during this movie. It's all just a horribly vicious cycle- one that is, ironically enough, supported mainly by an inappropriate romanticism to history. Note an early scene where King Jeongjo upbraids the ministers for venerating classical literary theory over practical political execution even though they don't actually seem to know or care that much about classical literary theory in the first place.

Scenes like this do a lot to emphasize the epic sentiments behind the film. All of the events in the story happen in the context of a major historical event, one which is periodically referenced with a timer the longer the movie goes on. And yet almost no one seems to actually care about running the government. It's all about sticking it to political rivals, maintaining aristocratic decadence, following orders, being true to your friends- all that good stuff.

Yet no one acrtually seems to enjoy it that much. Over time it becomes clear that the villainous faction in "The Fatal Encounter" literally employs a league of child assassins, and even goes to the trouble of legally adopting them just in case fifteen years later they need somebody important killed. They've even managed to suck the joy out of parental love. It's a development so absurd it's hard to imagine what any of these people could possibly want that would be worth all this trouble.

That last bit wasn't oblique praise, by the way. "The Fatal Encounter" is absolutely flawed in that the narrative is stretched so thin around such a wide cast of characters that it's difficult to define any of their emotions beyond very simple familial attachments- whether this is blood relatives or fake relatives or just a sense of duty, it all comes down to the same thing in the end. The world is terrible and should probably be burned down completely. But let's just burn down only a small part of it to be safe.

If there's any compliment worth giving to this movie, it's that for all the points that it feels a bit tedious, director Lee Jae-gyoo does manage the epic feel well enough that I often decided to just give him the benefit of the doubt. This is a very honest portrayal of a very unclean era that manages to avoid becoming so dark and gloomy that it turns into self-parody. This is admittedly not very high praise, but it's surprising how often movies manage to screw this up.