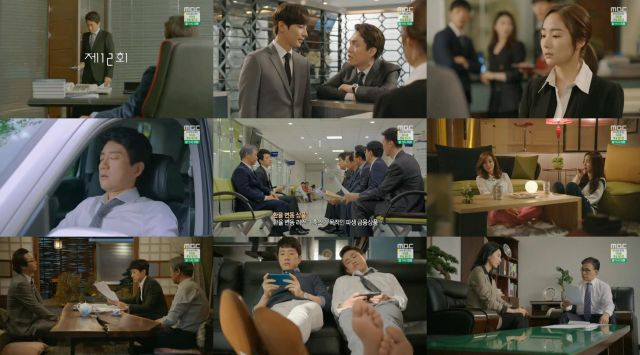 I got the feeling early on this episode that Yeong-woo is making up his plan as he goes along. The man is way too cool at Seok-joo's resignation, and it's difficult to see what sort of long term benefit Yeong-woo is supposed to reap from the departure of the firm's best lawyer. He appears to be assuming that Seok-joo will never turn against the firm at any point. Which I suppose may be logical from his perspective. We as the viewer know better mainly because we're watching a dramatic narrative.

Then Jin-won comes up on the scene, and that man is just plain spooky. He's ruthless and confident, wasting no time in making his presence felt. From a macro perspective, I can actually see why Yeong-woo would want Jin-won around instead of Seok-joo. Two aces would likely start fighting one another instead of the opposition, and in terms of general value, the younger lawyer who wants to make a good impression is a better long term investment than the older one who was showing signs of being surly even before the amnesia happened.

In fact, an eventual showdown between the two might be expected may well have already been planned. Jin-won seems to be angling for a fight, if only from the position we see of Ji-yoon as a surrogate. I like to think of her here as less an actual love interest and more a representation of their relationship with the legal profession. Ji-yoon is a reputation of the things a legal professional can have if they don't take the moral high road. Jin-won simply didn't have good access to her as a judge, at least not compared to his being an attorney at the firm.

Seok-joo, relievingly, doesn't put too much stock into any of this. His relationship with Ji-yoon remains subdued as he plots his next move. For the moment, the crisis with the company appears to be resolved, but Seok-joo is very much looking for redemption and at the end of the episode he's locked on to his best chance. The man's not being bullied into this confrontation here- he appears as an ally, not someone that needs to be convinced.

If there was any major complaint I have about "A New Leaf" so far it's the decided lack of legal action. Yes, there's lots of office work and dealmaking- which again, is the kind of thing lawyers spends most of their time doing in real life, so I can't really fault the drama for focusing on this. It's just that Kim Myung-min has been absolutely electric in the courtroom scenes, and until one of those happen with the current major conflict, his turn won't be totally convincing.