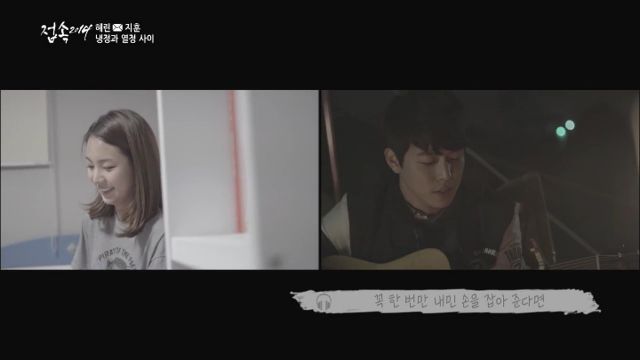 Well, it happens. Everybody finally meets each other. This episode is mostly just a documentary style look at people nervous about a romantic meeting. It's surprisingly compelling, actually. I think almost everyone has had that tense feeling of nervousness at same point, that same sudden panic that, oh no, this other person is going to hate me because I did that one dumb thing an episode or two ago. And it totally made me look like a dork, not a cool person.

Now, in real life, this kind of thinking is almost always wrong. People aren't that judgmental about awkward behavior mostly because they're never paying that much attention. But "Access 2014" is, by design, an entirely different situation. Everything has been deliberately scripted to be romantic. More than that, though, it's always felt very risky. These men and women are pouring their hearts out just on the off-chance that maybe this other person will care.

And this leads to the biggest misstep of the program, one that's really inherent in the concept. We don't really get an ending. Everything that happened with these three couples happened relatively recently. While the implication for the moment is pretty clear, a year down the line, who knows? Sure, it's easy enough to be optimistic in the immediate aftermath. A real relationship isn't just romance, though, and that part of the thesis remains entirely unproven.

Of course, the Korean New Wave romantic films that inspired the program have the same problem. Or all romances really. It's always the getting to know the other person stage that these kinds of narratives get stuck on. What makes "Access 2014" so intriguing is that over the course of those twenty days, it does feel like these people actually got to know each other. Without direct contact, they got creative and artistic, and that's really a better measure of a person's soul than a few nights of dinner.

Again, that's just the theory. The fate of these couples remains unclear, and I don't know if the program was popular enough to warrant a retrospective further down the line. Still, it was an interesting enough intellectual exercise, and for the viewer, just a moment of hope. It's nice to think that, as unwilling as we are to really talk to strangers in the modern age, they really are thoughtful people who are just looking for an excuse to break social boundaries and really communicate. It's a sweet sentiment, and for all its flaws, "Access 2014" does a great job exploring it.

Narration by Suzy and Roy Kim