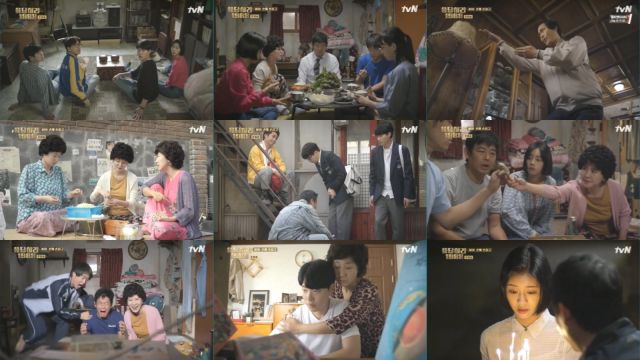 The real unspoken hero of the "Answer Me" series has always been whoever is in charge of the background designs. It could not have possibly been easy to pull together that much obscure eighties merchandise. Did the production team actually find this old Hidori stuff lying around somewhere, or did they have to custom order it? Everything looks so new and fresh, which makes sense because in 1988 this pop culture was both hip and relevant. Not so much today.

But the real culture shock isn't the obscure pop culture references, but rather the emphasis "Answer Me 1988" places on family and community. Now that really was a different age, when mothers had to yell at their children to come in for dinner. It's also a completely different kind of economy- note how the supper scene involves excessive use of the barter system, and for good reason. Back then South Korea wasn't skilled enough at capitalism for one person to get that many diverse foodstuffs on their own.

The plot? Well...in that regard "Answer Me 1988" is mostly just a sitcom. A really, unnecessarily long sitcom. Seriously, at ninety minutes a single episode of "Answer Me 1988" is long enough to be a movie. It has three commercial breaks. Strictly speaking this is more of a good thing but in practical terms the closest we have to a large overriding conflict involves trivia regarding Madagascar. Most of the characters don't have much to do except introduce themselves. Which is fitting considering how many of them there are.

So far the only characters to make much of an impression are Deok-seon (played by Hyeri) and her older sister Bo-ra (played by Ryu Hye-young). And this is mostly because I love their sibling dynamic. See, Deok-seon tries her best to avoid getting murdered by her older sister for slights either real or imagined. It's funny because Deok-seon should know better than to even come close to making Bo-ra mad, yet time and time again Deok-seon stupidly skirts right around the edges.

This dynamic, and to a lesser extent those of the other characters, illustrate how "Answer Me 1988" is staking its thematic claim on family. Not pseudo-families, like in "Answer Me 1997" and "Answer Me 1994", but real ones where the members can get legitimately angry and there's no easy to way to brush it off. The characters in "Answer Me 1988" have little choice about their living situation, yet make the best of it anyway and seem happy enough. Given how generally violent 1988 was, that's probably the best policy.