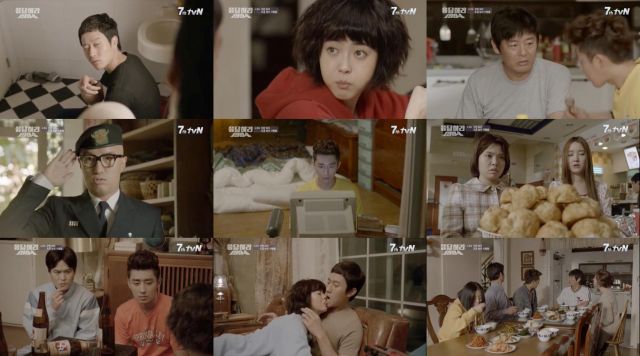 The full cast comes out this episode, and the already crowded house becomes outrageously cramped. Personality clashes abound as characters are forced to share space with strangers while realizing that, for better or worse, they're all going to be stuck like this for the long term. The storyline finally gets something we can call a reasonable plot hook- and it's fairly unclear how any of the current choices are supposed to work out solely in the context of the series' 1994-centered flashback.

"Answer Me 1994" appears to have decided to stake its claim on extended comedic conflicts. One character gets sick this episode. The inconvenience is consequently outrageous. A mighty struggle ensues to overcome all possible obstacles and achieve the stuff of dreamscape spectacle. Then the screw-up, and the drama's signature goofy sound effects which signal that everything has just gone sour.

I can only define three actual jokes. However, all of these jokes were the culmination of such lovingly rendered awkward goofy performances that took place over such an extended period of time that as far as I can tell, these jokes are the drama. We've got the charming build-up, the desperate attempts to keep things going, and then the truly epic letdown right at the end where the central character, in typical fashion, manages to bungle everything up. It's a credit to "Answer Me 1994"'s sense of slapstick that everything flows so well. While I can only define three jokes all of them are so heavily layered it is, at many points, difficult to tell which sections work only as build-up to the final joke and which also clearly work on their own merits.

Writer Lee Woo-jeong-I is to be commended for her great sense of complex comedic timing and structure. However, as funny as this episode is, I still don't have any idea where it's going. Literally speaking, I know how the big revelation that will make up this drama's grand finale and create the drama until then, but I don't have any idea what the human element is going to be. Still, if "Answer Me 1994" continues to be this funny, that complaint will prove a rather minor one.

"Answer Me 1994" is directed by Sin Won-ho and written by Lee Woo-jeong-I and features Go Ara, Sung Dong-il, Lee Il-hwa and Jung Woo.