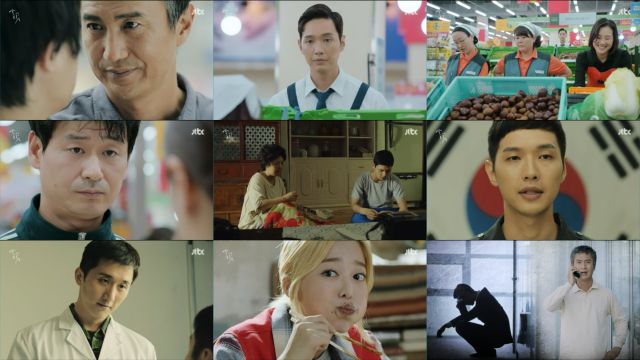 The time is summer, 2003. At a grocery store, the employees all have a good mutual working environment. A visit by a bunch of men in suits seems to confirm that the employees are, in fact, doing their job correctly and that there's nothing to worry about. Then there's the manager Soo-jin (played by Ji Hyun-woo). He seems unnecessarily gloomy. Then we get the flashbacks explaining just why it is that Soo-jin has such a pessimistic outlook- and realize that his overall estimation of the true situation is almost certainly correct.

The first episode of "Awl" is all about contrasts. Soo-jin's upbringing simultaneously and somewhat counterintuitively emphasized both the importance of the moral order as well as the importance of following orders. Soo-jin grew up during that awkward time period when South Korea was still transitioning to democracy, so many of the vestiges of the old system still existed even if in theory they weren't supposed to anymore.

The result is that Soo-jin knows that change isn't easy. The people who have power don't just give it up because now there are free and open elections. The universe of "Awl" isn't one where the powerless get what they want by being nice and friendly. When the guys you're up against have zero qualms about hiring gorillas to put you in the hospital...well, look, this is why union thugs exist in the first place, as much as we'd like to forget the fact that for most of labor history "security" has been a euphemism for "goon".

About the only positive element of Soo-jin's backstory is that the threat of violence tends to be more important than actual violence. Even so, Soo-jin has throughout his life been forced into a position of being punished for having moral principles, and he rather hilariously reacted to these setbacks by taking a job in the grocery industry, where you'd think mobster-like business principles wouldn't apply.

Alas, "Awl" isn't just an imaginary story- it's based on real events, so that even the more absurd touches are tinged by the fact that, well, this is all based on facts. The worst of it is that, as we are constantly reminded, the grocery store employees are just normal people who like Soo-jin, never expected they'd have to fight over anything this frivolous. When Soo-jin says those fateful words near the end of the episode, the ones we know will cause a fight, right away we cut to a gross character joke. Messy contrasts indeed.