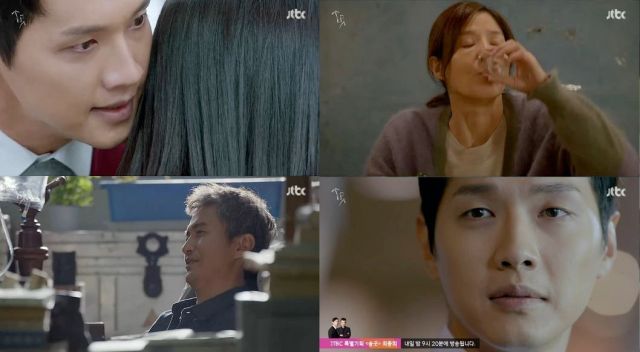 Manager Ko makes a big general mess of employee relations. I guess because...management is trying to provoke a strike? I really don't know anymore. Ever since Go-sin stopped giving lectures about the underlying causes behind labor disputes I've had a lot of difficulty figuring out what exactly the plan at corporate even is. They just seem to be stubbornly stamping their feet and refusing to acknowledge that a problem exists. Even if management could somehow win this is obviously a completely new labor environment.

The same can't be said for the way that "Awl" has been approaching its themes. The drama is just repeating itself at this point. The employees have to struggle with the fact that management is not willing to let them unionize, and is willing to resort to underhanded tactics to try and bully them into stopping. Soo-in is sad because this was all his idea in the first place and so the situation is kind of his fault. Except, of course, that this bullying started before the union idea even came up, back when "Awl" was still about military metaphors.

The last leg of this episode, by the way, is just another long military flashback. And even these are getting tangential to the situation at hand. Mostly I'm having trouble with the metaphor in this case because soldiers acting insubordinate on base is not a concept I'm very familiar with. Out of context that whole sequence kind of comes off like a conservative attack on a lack of proper respect in military institutions. Was that really a problem in the early nineties?

Not that this matters. Again, "Awl" is moving toward a strike, and yet the entire situation lacks much in the way of serious urgency. Part of that just comes from this being the penultimate episode. There's only two ways this can resolve. Either the end of the next episode ends with the success of the labor movement, or "Awl" decides to copy "Cart" and make the ending not much of an ending at all.

I can't really hide my very serious disappointment in "Awl" right now. Normally the problem with this drama is that it tries to pack too much information into a limited period of time. Now the story is limping toward the end, taking its ideas to the most logical conclusion and just sort of leaving it at that. Some kind of intriguing flourish would be nice, is all I'm saying- something more memorable than So-jin's make-up.