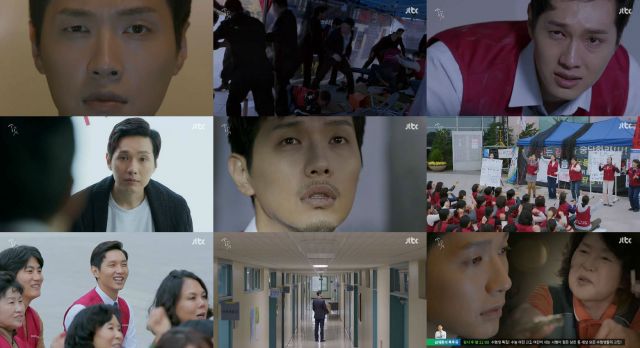 Try as it might with the expanded eighty-minute runtime, the final episode of "Awl" can't really overcome the fact that the most potentially interesting part of the entire drama (the strike) ends up being condensed into a single episode. What's more, most of this runtime is just Soo-in sulking about his apparent failure after he refuses to use the main dynamic storyline event to press for an advantage against management.

I found that whole decision to be really irritating, because after all the work the union has gone through to get this far, they're just going to let themselves get shut up by a bunch of thugs? The fact that management plays dirty isn't new information. It's quite literally the entire reason why Soo-in went to the trouble of forming a union in the first place. Even granting that people have been seriously hurt, it seems to me like it would be much more insulting to them to let that sacrifice be for nothing.

No, the ending isn't actually as gloomy as this review is making it sound. By and large, though, the runtime is mostly the same generally discouraging material "Awl" has been focusing on in the latter portion without much in the way of reprieve. There's only the most piecemeal barely alluded to character development. I've never minded the weak characterization in "Awl" that much, but it's a pretty impossible problem to ignore in the context of a drama's ending.

About the only part of this episode that I especially liked was the final rundown of Min-cheol. When you get right down to it Min-cheol is a tragic figure. For the sake of acceptance he's always been willing to act as a toady, never really appreciating the fact that his bosses would jettison Min-cheol from the team in a minute for any kind of minor tactical advantage, to heck with all the loyalty he's shown them so far. The flashbacks are especially sad because they're just so very much in character.

Although even this just calls attention to how the other characters have lacked similarly meaningful characterization. We pretty much knew all there was to know about Soo-in and Go-sin within the first episode. None of the characters in "Awl" really inspired anyone else to do anything except continue the good fight. There is admittedly some merit in this approach, but as the drama drifted away from explanation regarding labor movements and more into thicker storytelling the weaknesses in the narrative have only become much more obvious. While interesting enough in concept, the execution of "Awl" left a fair amount to be desired.