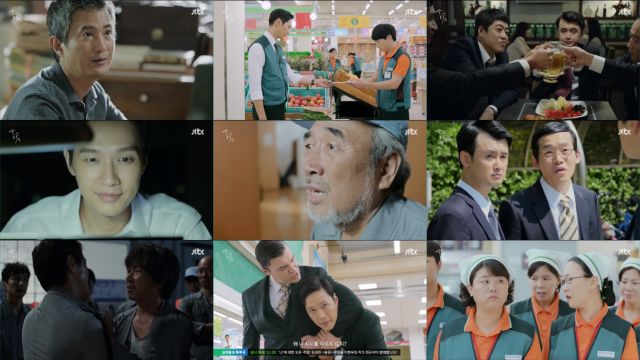 Soo-in continues to wait with mounting dread for the situation to finally culminate in disaster. The constantly recurring analogy of the animal trapped in the headlights is an appropriate one. The paradoxical aspect of all this is that the episode practically happens in slow-motion, and yet Soo-in is constantly incapable of taking any sort of decisive action to just try and resolve the situation himself. It goes against all Soo-in's training- but not his instincts, ironically enough.

It's obvious that most of the grocery store employees have no experience with corporate bullying and intimidation tactics. Again, this makes sense. The grocery store is the last place a person would expect this kind of behavior. Most people, when told they're flawed in some way by a superior, will assume that the superior is acting in good faith. It's just Soo-in and his past bad attitude that lets him recognize that the suits are playing a long game where the first step is to trash everyone's self-esteem.

Messed up as this all may sound, it's all part and parcel of the capitalist system- which far from being a free market, has usually operated with implicit and explicit support of the government, sometimes to the point of even sending in the National Guard. As this episode demonstrates, the fact that Soo-in knows what's happening psychologically doesn't give him any meaningful power to resist. And so, enter Go-sin (played by Ahn Nae-sang), labor lawyer for the weak.

Go-sin's attitude may be a tad ambitious. Even so, at least his brand of climbing the social ladder involves empowering people to feel less weak. It's a pretty marked contrast from the suits- yet at the same time, so far Go-sin's opponents have looked pretty low level. Bullying and abusive corporate policy can, of course, be just as bad at the lower end as at the higher end. But the problem with suits is that, well, they wear suits.

"Awl" is taking its sweet time with the wind-up. You may have noticed that to date Soo-in and Go-sin haven't met yet- this is because the production team has to establish the background first. That this is even necessary says a lot about the way modern culture treats labor history- these events are only set twelve years in the past. Although that's a big part of the point. Every time modern corporations insist that regulations are obsolete antiquities, they're always counting on us forgetting what life was like before we had them.