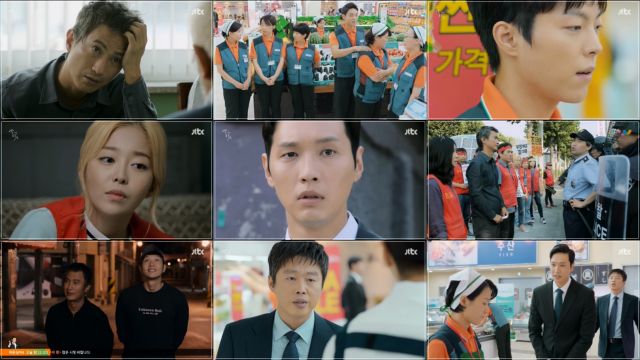 To date So-jin (played by Kim Ga-eun) has not had that much to do in "Awl" except hang around Goo-sin's office. This episode it's revealed that she in fact has a very important role to play- as Soo-in's love interest. This initially seems kind of silly given that "Awl" is literally a drama about labor relations and unions. About the last incentive I'd expect to hear is that you can meet pretty girls while labor organizing.

But the comic relief is a welcome one. Soo-in is both humorless and clueless, and it's nice to get an obvious juxtaposition for that in terms of how he relates to women. Take that as jumping off point for Soo-in's interactions with Goo-sin. Soo-in still doesn't really have any clue how labor unions work, and as Goo-sin explains, this is a deliberate construction of the system. An ignorant population is that much less capable of exercising their rights, because they don't know what their rights are.

And of course, to a significant extent, it doesn't actually matter what our rights are because the police have this very curious habit of always siding with whoever happens to have the most money. Goo-sin is very refreshing in that, for all his legal knowledge, he has very little faith in the system to actually do anything. Goo-sin's not in this for the justice so much as the chance to rabble rouse. Labor organizing is not a job for those who care what others think.

That's the character progress Soo-in goes through here. He has to stop thinking of himself as this victimized deer and appreciate the fact that he and his employees are all being bullied. And here too So-jin's blatant flirting is relevant- it works to help convince the generally unconfident Soo-in that yes, he is competent and capable of actually accomplishing things just so long as he puts serious effort into it. Even when that task is something as awkward as trying to interact socially with the employees Soo-in wants to fight for.

"Awl" is still in the wind-up phase, though. Fortunately the preview promises that starting next episode, Soo-in is going to stop being a spectator to the fight and actually join it on the front lines. The cliffhanger is a small, but quite solid step in this direction. The corporate overlords only have power as long as the employees are ignorant and scared. Soo-in is neither.