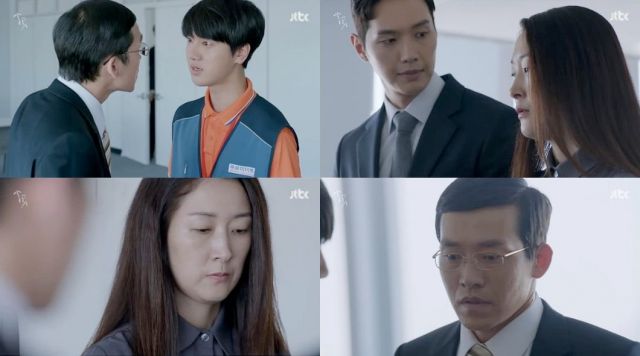 The first portion of this episode deals with the quasi-legal Kafkaesque nightmare that is directed arbitration. Basically, most corporations (and these days, universities) have a system in place to insure proper cause for dismissal. Such arbitration vaguely resembles a legal system but it is not actually a legal system. Lawyers can't help you there. Joon-cheol (played by Yesung) actually has a slight advantage compared to most in that. He at least had some idea ahead of time what the charges were going to be.

While it's not impossible for a person to prevail against such a system, "Awl" effectively establishes how these kinds of tribunals aren't designed to face up against any kind of challenge. Decisive evidence is dismissed on the grounds of credibility. Notably, the explicit assumption is that people who wear suits are less likely to tell lies than people who do not wear suits. As obviously absurd as this assumption sounds after the last several years of financial scandals it's still considered de rigueur.

What makes these systems so perverse is that there's always this assumption of equal treatment even though there aren't any guarantees. Kangaroo courts simply neglect to charge the people they like. Yet for all this capitalist culture as a whole insists that the playing field is level. Go-sin's cartoon explanation well illustrates the absurdity of this kind of reasoning when applied to anything except financial success.

Which also segues into backstory. Yes, even though "Awl" actually manages to get through an entire hearing mostly interrupted, once that's over with the remainder of the episode goes into flashback mode explaining how one character got involved in the labor movement. What's more, we're also given a fairly essential hint that another character's backstory is quite a bit darker than has yet to be implied. None of this is a surprise, of course, given that, as the opening constantly reminds us, "Awl" is set in the summer of 2003.

That much is an obvious relic of "Awl"'s roots as a webtoon, and it's one of the stylistic choices that at times annoys me. Webtoons can get away with interrupting the plot for extended stretches just to do character backstory, but in drama form what we end up with is all the exciting stuff frontended, and then we get background information that's not obviously immediately relevant. But given that the union's main immediate goal is just to survive, careful continuous reflection is admittedly pretty important.