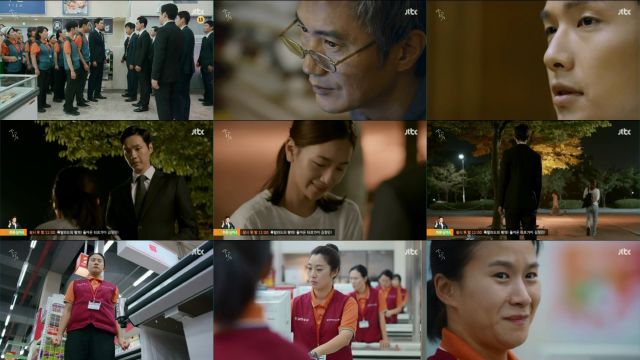 Director Kim Seok-yoon makes the smart decision this time of putting the character building before the action this episode. Unfortunately the character building isn't all that relevant to the usual labor struggles, which at this point I think we just have to accept as "Awl"s main permanent problem. This isn't a story about characters so much as it is about labor movements. Which is appropriate because labor movements by definition aren't individual action, but mass collective actions mobilized due to a system of mass production which treats people like objects rather than people. To be honest I'm getting kind of sick of repeating that defense all the time.

Still, the labor movement aspects are definitely engrossing. Soo-in's countermove to the bullying of management last episode is quite appropriate. If they're going to insist on being pedantic over the legal wording in the contracts, then why shouldn't Soo-in? It's easy to lose sight of the fact that contractual violations almost always benefit the corporation because of certain unspoken rules that are explicitly illegal but almost never actually enforced.

All of this gets to a very essential question- company loyalty. But why? Costco is, to me, a fascinating corporation because they have high wages and excellent benefits. Employee turnover is extremely low, for exactly these reasons. But Costco has not sacrificed market share for these goals. Now, contrast this to the company in "Awl", which is expecting Costco level loyalty from their employees while simultaneously explicitly plotting to contrive excuses to fire these very same employees. Noone seems to appreciate the basic irony of this.

Especially not Min-cheol. He frequently comes off like the submissive partner in an abusive relationship. Min-cheol is willing to do anything for the corporate overlords that won't even condescend to tell him thanks for sticking his neck out and breaking the law for their benefit. The actions Min-cheol take this episode to further ingratiate himself with his superiors are...well...

I'm not sure what to think about what Min-cheol does. On one end I want to condemn it as improbable, but at the same time, I'm not going to claim with one hundred percent confidence that something like this has never happened in real life. It just seems like too much could have gone wrong with that plan. It beggars disbelief that not a single customer was watching this confrontation, and a mere swipe of fingerprints would confirm that the elaborate lie is, in fact, an elaborate lie. And so my opinion of "Awl" ever so slightly trends more to the ambivalent.