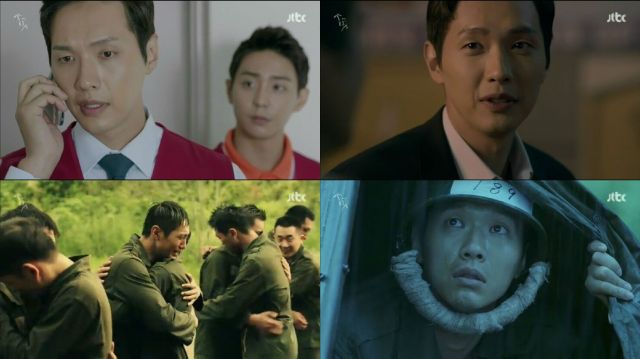 The fight between the union and the company finally goes public. Why it was necessary for this fight to go public is not especially clear. As of yet the union hasn't really made any demands. What ends up sending management over the edge is, of all things, a dispute over uniforms. It's a battle that's entirely symbolic in nature because, as "Awl" notes, customers don't pay attention to stuff like what's actually written on the uniforms just so long as they can tell who's an employee and who's not.

Although the more interesting part of the fight is the extent to which it's outsourced. "Awl" does not paint a very flattering portrait of corporate management. From what we can see the higher the pay grade, the more likely it is that a character will simply "solve" problems by yelling at the next lowest subordinate in the chain to solve the problem for them. Min-cheol earns his paycheck as a corporate stooge, but I'm genuinely not sure what Jung Won-joong's job is, or even his character's name. Hilariously, one character explicitly demands an answer to the former question and doesn't really get one.

If any single issue pervades "Awl" it's that every problem which comes up in the drama just seems so very, very preventable. When it becomes necessary to hire security guards to restrict access to the grocery store, and it also becomes necessary to use heavy bolts and locks to further restrict employee access, at some point I have to wonder just how expensive union-busting has to get before it financially becomes a better decision to just let the union form.

As usual, though, aside from all these pointed questions and discussions regarding labor issues...there's not actually all that much to "Awl" that's really all that interesting. I miss the creative visual metaphors of the earlier episodes. Well, in all fairness we do get another flashback to Soo-in's army days- although in this case the metaphor was so obvious I'm not sure it was really necessary to use the military to explain it.

At best I can only really identify with the characters of "Awl" generically as people who need paychecks to get through their daily lives and would just as soon not have to go into this fight at all except that their jobs are under existential threat. Which, come to think of it, does make the military analogy appropriate. In the army, you die, it's game over. On a fixed income losing your job isn't that much less dangerous.