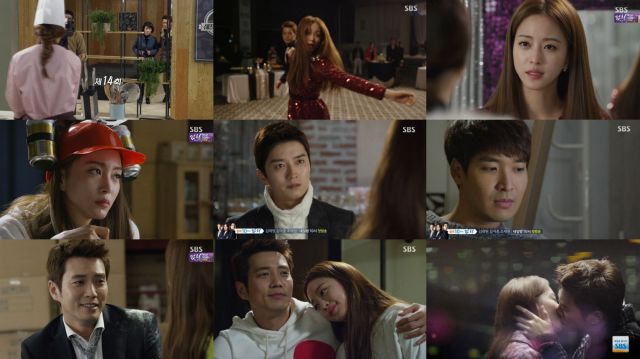 To go back to the fairy tale analogy- Geum-ran has already met Prince Charming once, and that didn't turn out too well. So in that context, it's easy to see why she's dramatically hesitating in the face of Tae-hee's increasingly ardent advances. The divide between fantasy and reality is so clearly delineated that up to the last minute I really had no idea whether Geum-ran was going to respond to Tae-hee's proposal with a yes or a no. Either one would be a valid decision- even if one would more obviously set up conflict.

Yet even here "Birth of a Beauty" provides a convincing argument that conflict just isn't that fun. And no, a successful marriage can't be built on fun alone. But think about what we've seen of Tae-hee and Geum-ran from past episodes. Both of them showed intense, devoted loyalty to their former partners. In both cases, they only finally gave up when ironclad evidence appeared indicating that Kang-joon and Chae-yeon are genuinely evil, terrible people who don't deserve that level of trust. It's hard to imagine that Tae-hee and Geum-ran would treat each other any differently, given what we've seen of their moral compasses.

Meanwhile, Kang-joon very slowly pieces together that Sara and Geum-ran are the same person. What exactly he's planning on doing with this information is unclear. At one point he orders scientific evidence from an actual lab proving this fact without a doubt. Really dude? What happens if literally anyone else gets a hold of this information? Kang-joon really doesn't seem to appreciate the fact that the main way he can doom himself right now is by continuing to fight over this stuff.

All of the villains in this drama are working from completely different agendas. At this point we're just waiting to see who's going to backstab who in which order. They don't even have a coherent nominal goal. If any one of the three gets what they want, than the other two lose out. None of these characters are going down without a fight, and all of them still have plenty of ammunition left over. I'm honestly curious whether Tae-hee and Sara are even going to have to do anything to come out ahead here.

For what it's worth, that's the main weakness at this point. It's been so long since Tae-hee and Sara have pulled off a compelling scheme I'm worried that they might not actually remember how. Still, as Tae-hee points out, there are plenty of uses for his excessive diorama manufacturing skills that don't involve crazy revenge plots. The villains might do well to realize that there's more to life than this one exact thing they want right this minute.

"[HanCinema's Drama Review] "Birth of a Beauty" Episode 14"
by HanCinema is licensed under a Creative Commons Attribution-Share Alike 3.0 Unported License.