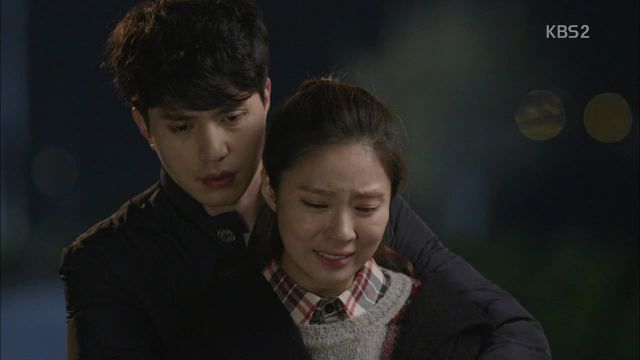 The penultimate episode of "Blade Man" is about letting go: letting go of obligation, guilt, false notions of nobility. It deals well with the personal demons of Hong-bin, Se-dong, and Tae-hee, but neglects the mysticism (again) and the issues with Hong-bin's family (again). The neglected elements come from bad road mapping, bad planning. There isn't too much information or too many plot threads in "Blade Man" - they just weren't all woven into the fabric of the drama early enough.

Let's get Madam Yoon out of the way. She is a villain who holds no sway. Yes, she is easy to hate and does despicable things. But with each passing episode she is less fearsome and less important. Her actions are vital to the story, and yet she is boring. It is no fault of actress Lee Mi-sook. She is an unfortunate victim of awkward planning. Along with Madam Yoon's strange role in the drama is Hong-joo's mother's role. She had one scene this episode: she asked for divorce and abandoned her son. There was no purpose to it. We did not see the results of her actions and how they affected Daddy Joo or Hong-joo. Perhaps that will come next episode, but it was a strange inclusion. The time would've been better spent on explaining outstanding issues.

One major outstanding issue is Hong-bin's blades and his powers. It has not been dealt with in ages. The powers manifest only for story convenience. Se-dong does not yet know about them. He has dealth with his bottled up emotions and his anger, but the way the powers just slipped away from the screen is disconcerting. It could be the writer's way of telling the audience that Hong-bin has dealth with his issues. He learns to apologize from the heart without goading, a problem he had earlier on in the drama. This issue comes full circle, which was a nice resolution.

There are a few other such resolutions. The episode played with the comparison a tethered boat on a free-flowing river. Se-dong, Hong-bin, and Tae-hee were all like tethered boats who needed to be free to travel. Tae-hee was the knife who released the three of them from their tethers of obligation to each other. She told the couple to stop considering her and move on with their lives. She also realized that her avoidance of them and her responsibilities was tightening the knot of obligation. It was the first truely great inclusion of Tae-hee's character. She was the catalyst for change. She forced Se-dong to consider her own needs rather than be tied to the needs of others.

Where the final episode will go, I do not know. I hope it focuses more on Hong-bin, his family, and Se-dong's inclusion in that family. The issues with his father have not yet been resolved and one episode is not much time to resolve them in. The next hour needs to be used wisely to give "Blade Man" satisfying closure.