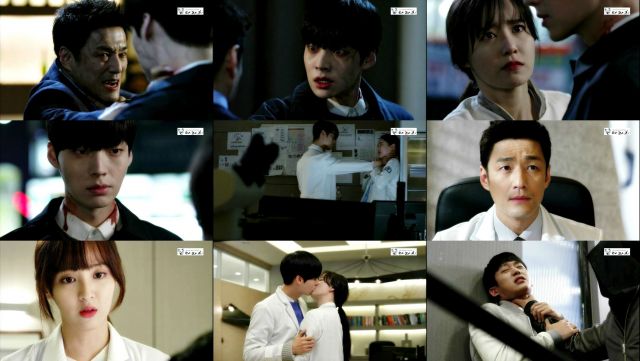 This episode opens up with another apparently dangerous cliffhanger rather nonchalantly solved, and we proceed from there to yet another cliffhanger that initially seems to be dangerous but...somehow I have trouble feeling the dramatic tension. "Blood" is rather surprisingly repetitive considering that theoretically this is supposed to be a long-form narrative. It would actually be much less repetitive if it had just gone with the standard patient-of-the-week format typical for medical dramas. Now there's a weird thought.

But no, instead what we have are patients who have been mostly been around since the drama started and who have only really changed in that special vampire medical treatment has made them more prone to random outbursts of violence. At some point Jae-wook really needs to admit that the outcomes of the medical trials are pretty ineffable at this point. Why would anyone want to take lifesaving medicine that turns them into an irredeemable huge jerk?

At this rate it looks like Jae-wook's plans will fail without much input from Ji-sang or Ri-ta whatsoever, except to the extent that they're the only people actually paying attention to the results of the treatment. I can't help but find it rather comical that all Jae-wook's minions ever do is surreptitiously give people intravenous injections. They actually have to steal data from the good guys to figure out what's happening with their own experiments.

Ga-yeon's character arc is...well actually she hasn't really done much of anything since "Blood" outed her as being a secret agent. Which is disappointing, given that Ga-yeon is one of the few characters here with actual potential to be interesting. What's especially misplaced is that her impending objections to the plan are almost entirely practical ones- never mind whether or not it's evil to do secret medical studies. There doesn't even seem to be much of a purpose at this point.

That's a good descriptor for "Blood" overall actually- there doesn't even seem to be much of a purpose at this point. This really does appear to be a drama that never made it out of the basic planning stage. Vampires are in. Medical dramas are in. And Ku Hye-sun has a leading role. That's really about all there is to "Blood"- it's a giant mound of stuff taped together that only ever accidentally manages to be entertaining when the story hits the right level of stupid. And sadly, there's not the right level of stupid here. Although the closing sequence did remind me those Ray Ban commercials I saw back when I was younger.