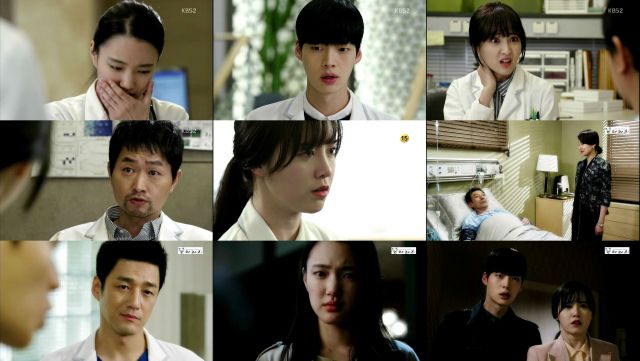 You know, let's never mind the henchmen for the moment. Why do the regular hospital employees continue to work for Jae-wook under these conditions? Does it actually say in their contracts that they're obliged to continue their employment even if their lives appear to be in imminent physical danger? The patients are so out-of-control that I'm surprised they aren't straight up handcuffed to the gurneys. Even the security guards must be pretty weirded out by now.

It's a minor logical problem really- I've certainly seen worse. But the main problem with "Blood" going into the final stretch is that it's just not terribly interesting. I'm assuming at this point that Jae-wook is going to get hoist by his own petard, and that his evil research has actually ended up creating some sort of super anti-vampire pathogen by accident. At least, that's the only explanation I can come up with for why the coughs are so clearly spotlighted.

That leaves our actual main characters with very little to do. There is a tragic deathbed scene, although the dying character in question was such a clueless putz it's hard to feel all that bad about what happens. Personally, I'm more perplexed why the question of how Ri-ta's parents died has suddenly become such an important plot point. In the long run I'm not really sure it actually matters all that much what the character motivations are- the whole presentation in "Blood" has consistently been rather cartoony.

Ga-yeon's character development is sort of interesting, I guess. It's nice to see people questioning Jae-wook, although it sort of begs the question why it took so long. Ga-yeon has had disappointingly little screentime after having been revealed as a vampire, and I couldn't help but laugh watching the flashback montage and noting that every single noteworthy thing she's ever done was back before there was anything interesting about her character.

It's worth noting, as usual, that "Blood" isn't really that bad a drama as long as your standards aren't that high. There is, at this point, passable chemistry between the lead actors. And while I can certainly criticize the general absurdities of the plot the story is at least moving forward in a mostly coherent direction. It shouldn't be necessary for story contrivances to be pulled out of nowhere in order to finally put an end to Jae-wook's reign of terror. Still, that's pretty faint praise indeed for a drama that had such promising potential.