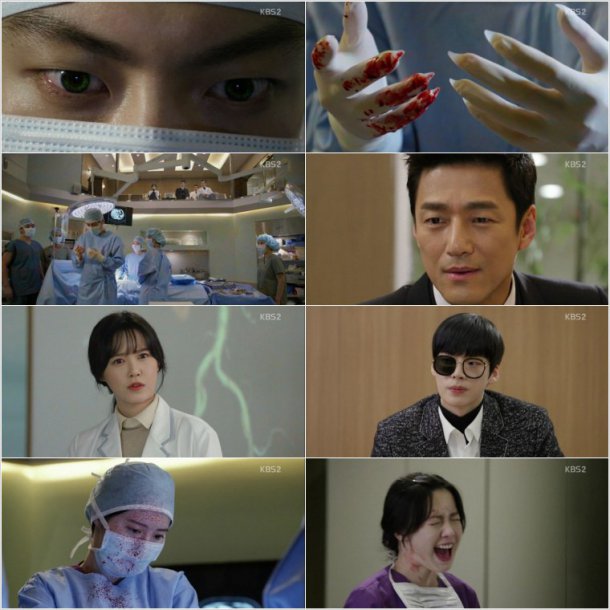 The origin story is still being explained here...to the point of boredom, unfortunately. About the only relevant information we get here in regard to Ji-sang's quest is the broader motive. Ji-sang is trying to explore the notion of vampirism as a medical condition which may or may not have possible long term benefits. Ji-sang's entry into the hospital scene appears to be directly related to this inquiry for information, which if nothing else certainly gives the plot some potentially interesting direction. Then the robot shows up.

Look "Blood", I want to like you. Really I do. But whereas the first episode was a mostly well-focused origin story, this one's all over the place in terms of tone and intent. Sometimes this can be funny. I liked the whole bit with Ji-sang and the shades. But it's mostly irrelevant except in the context of having Ji-sang butt heads with Ri-ta (played by Ku Hye-sun). Which come to think of it doesn't make much sense for Ji-sang's character. Shouldn't he be trying to keep a low profile rather than starting fights?

Ri-ta's character, for what it's worth, is much easier to pin down. She's not related to all this vampire nonsense. Ri-ta's just a confident, ambitious surgeon who doesn't like being disrespected. Unfortunately this is a pretty thin motivation. "Blood" is making the mistake of trying to have the story both ways. The drama can't be about vampire conpiracies and supernatural pathology and just be a bog standard medical drama. The fact that Ji-sang is the only character who knows what's going on is a pretty big storytelling problem here.

...Well, I suppose there is one other character who knows what's happening. Jae-wook (played by Ji Jin-hee) also has interests related to vampire pathology. In the immediate sense, though, he seems content to just screw around with Ji-sang. And I can't parse what the reason is for all this needling. Why are the characters getting involved in petty fights when there isn't even anything for them to fight about just yet?

My main hope is that the awkwardness of this episode is just the result of lots of character-based infodumping, which tends to be a lot less fun than actually getting to see backstory directly. Presumably, now that all of the elements have been set up, we're going to move on to the actual story. We know the long-term goals- so let's have some short-term goals to bide us in the meantime.