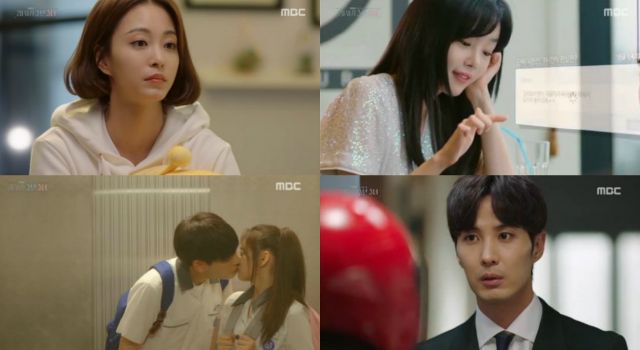 The opening montage of "Boy and Girl From the 20th Century" features the three protagonists growing up in the nineties with that ever present babysitter- television. The montage stops before we get to any twentieth century dramas that any of us might have heard of, but the moral lesson learned by minor celebrity Jin-jin (played by Han Ye-seul), common employee Ah-reum (played by Ryu Hyun-kyung) and aspiring lawyer Yeong-sim (played by Lee Sang-hee) is pretty clear. They definitely don't want to live a life of horrid married life clichés like what they saw in the dramas.

Bear in mind that, this opening notwithstanding, "Boy and Girl From the 20th Century" has surprisingly little interest in cultural commentary on how life in South Korea has changed for women in the last twenty years. Life for the three central characters is a lot more egalitarian than I was expecting. Jin-jin's main antagonist is obnoxious, younger celebrity Ha-ram (played by Shin Se-hwi), rather than any form of patriarchy, and Ah-reum's desire for a ribald sex life passes without commentary.

Yeong-sim does face some workplace friction- although this has less to do with her being a woman and more just a matter of her being a little old. The subtler dramatic elements are largely unexplored. And that, ultimately, is my main source of discomfort with "Boy and Girl From the 20th Century"- there's all these obvious workable dramatic conflicts, yet surprisingly little to keep these moments interesting in any obvious way.

The closest we get to a real fight is the way Ha-ram snaps at Yeong-sim while pretending like her slights are unintentional. Then Yeong-sim chooses to be the bigger person, and refuses to let Ha-ram get to her emotionally. While this is naturally the best way to get around such vocational problems in real life, from the perspective of a viewer, we're only watching half of a generally passive-aggressive fight. That's not exactly exciting.

It does admittedly make sense from the standpoint of characters trying their best to avoid living soap opera style lives even while their lives have soap opera style elements, but that just leaves me feeling like the whole concept here is mismatched. The storylines aren't dramatic enough to be serious, and they're not funny enough to feel like a situation comedy so...what are we looking at here? Just incredibly basic slice of life? Because that's all I'm seeing.

"[HanCinema's Drama Review] "Boy and Girl From the 20th Century" Episodes 1-2"
by HanCinema is licensed under a Creative Commons Attribution-Share Alike 3.0 Unported License.