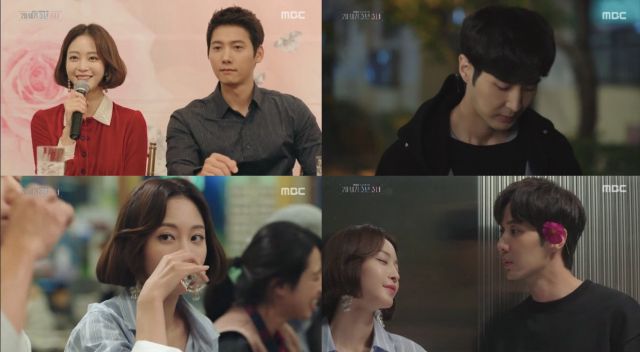 There's a scene here where Ah-reum calls Woo-seong on the phone and they talk about...how Woo-seong seems to have too much free time. Increasingly it feels like the characters in "Boy and Girl From the 20th Century" are engaged in some kind of weird bet to see who can go through the most obvious situations to ask someone on a date or be asked on a date without actually doing it. Even when we are promised dates, circumstances contrive to prevent them from happening.

All this is part and parcel for the weird feminist ethos "Boy and Girl From the 20th Century" has against stereotypical courtship behavior. I was very fundamentally baffled by the scene where Jin-jin decides that Ji-won should not make dinner for her, instead she should make dinner for him. What is this, a competition to see who can be nicest? Is that why everyone is slow to ask each other on dates, because asking someone for a date is potentially awkward?

But then that whole thing was just a clumsy set-up to get Jin-jin into the grocery store where she is recognized by, of all people, a gagle of elementary school children. Is Jin-jin's original media job in children's programming? Because otherwise I can't think of any reason why they would recognize her. Granted, it's possible I missed that particular bit of exposition. Which is frustrating, because Jin-jin working on a children's show would actually make for some pretty good visual gags.

Add that to to big list of flaws in "Boy and Girl From the 20th Century"- a lack of imagination. Ah-reum even has a brief fantasy sequence which I did not initially recognize as a fantasy sequence because the whole scene was just so mundane. It's just Ah-reum and her friends hanging out and doing chit-chat at a slightly visually different location than usual. Real estate acquisition is not a compelling goal in and of itself.

Although I should probably be grateful that Ah-reum even has a goal at all. Poor Yeong-sim doesn't have any particularly obvious professional or personal goal. All we ever see her do is work at the law office. Even such fundamental information as what cases she's doing, or why Yeong-sim wanted to get into law in the first place, are left unexplored as we instead just see her do normal boring office work. Grocery shopping, office work, and phone calls. If I wanted to watch that I'd invest in a mirror.

"[HanCinema's Drama Review] "Boy and Girl From the 20th Century" Episodes 15-16"
by HanCinema is licensed under a Creative Commons Attribution-Share Alike 3.0 Unported License.