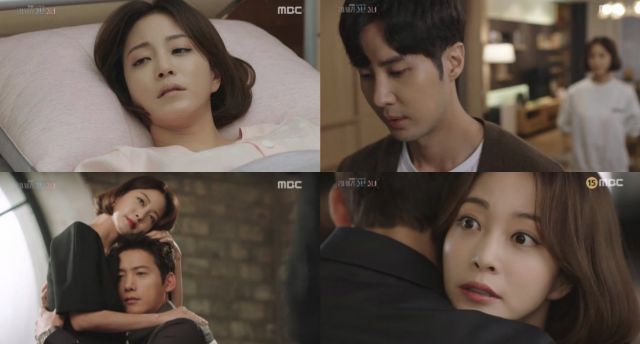 So Ji-won and Jin-jin finally figure out the intrinsic flaw in their whole pretend not to be interested in each other for no reason plan. They end up explicitly saying this in front of a third person, who naturally concludes that Ji-won should be up for a blind date with his daughter. It does, admittedly, still take until the end of episode twenty for them to finally realize that neither Jin-jin nor Ji-won wants Ji-won to date another person, but hey! At least the story's finally getting started!

That plotline also benefits a lot from comparison. Episode twenty also features Ah-reum finally getting closer to Woo-seong, through a damsel in distress storyline of all things. I was hoping for a twist ending there. We never actually saw Ah-reum pay the taxi driver, so it stood to reason that he was skulking outside of her home because he wanted to be paid. But alas, the only apparent moral from that storyline is that all taxi drivers are rapists.

Episode nineteen has also, for the first time, actually shown off the appealing potential qualities of fake marriage variety shows. The entire premise of a trip to Jeju actually does allow for Jin-jin and So-ni to give sincere opinions about what they would want to do on a hypothetical vacation. These are actually some of the better character building moments we've ever had for them. I would never have guessed that So-ni was a huge fishing nerd or that Jin-jin has regrets about entering the entertainment industry at a young age.

...And by young age I mean early twenties. It's weird how little we know about Jin-jin, considering that in theory all "Boy and Girl From the 20th Century" is character building. Goodness knows there's no plot to speak of, just various vaguely interconnected moments. The scene where Jin-jin delivers a brief statement in almost perfectly fluent English was legitimately impressive.

But aside from making Jin-jin look cool, that scene doesn't really accomplish anything. As was seen in "Madame Antoine" Han Ye-seul does indeed have a very good talent for accents. I don't know if she's actually a polyglot, she just has perfect intonation. That's the problem though. I'm thinking in terms of Han Ye-seul, not Jin-jin, and when that big scene actually gets me to thinking of one of the few strong points of a disaster like "Madame Antoine" that's just one of many signs of trouble.

"[HanCinema's Drama Review] "Boy and Girl From the 20th Century" Episodes 19-20"
by HanCinema is licensed under a Creative Commons Attribution-Share Alike 3.0 Unported License.