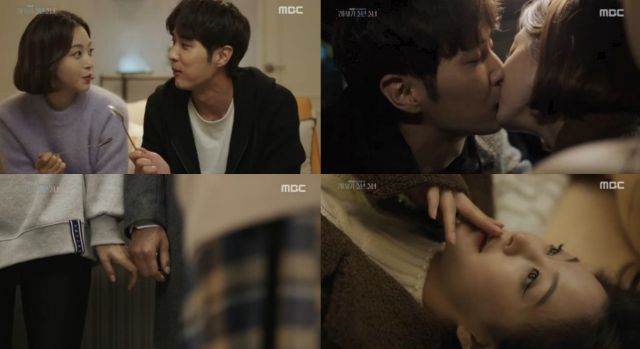 Now that Jin-jin and Ji-won have finally gotten together romantically, "Boy and Girl From the 20th Century" shifts to the next stage of the storyline- hiding this relationship from Jin-jin's parents. And also the paparazzi. I rather wish we'd gotten more focus on the latter one. Jin-jin has good tangible reasons to want the paparazzi to not find out about a boyfriend. But the same attitude evinced toward her parents just makes Jin-jin come off as childish.

A lot of the elements in "Boy and Girl From the 20th Century" would work a lot better if the principle characters were maybe ten years younger. Shoot, maybe even twenty years younger. They act as if they don't have a care in the world, so it's easy to forget they actually have serious responsibilities in long term jobs. Yet somehow or other they always seem able to ditch work at a moment's notice in order to help each other with mild problems.

There's also the matter of how the inconsistent characterization would be easier to rationalize with younger characters. I'm not really getting how Ah-reum can easily stand up to butt-grabbers on the airplane yet a few crass remarks from a random taxi driver are enough to make her swear off taxis forever. I could have sworn that Ah-reum used to just take the airport bus to get home, which is what most flight attendants do, but I can't remember whether it was ever actually addressed why she was taking a taxi in the first place.

I'm not confident enough to say it was never addressed, though, because so much of this drama is so forgettable that this information may well have slipped right past me. Most of the more relevant possible storylines are treated so flippantly they end without even really starting. I'm baffled as to how, instead of watching Yeong-sim do actual legal work, we're instead watching her have drinks with Kyeong-seok.

Perhaps I'm being unfair, since the genre standard for this kind of girls' talk drama is that work is de-emphasized for the sake of relationships. But we don't actually know anything about the relationships. The main women characters barely talk to each other, and aside from Jin-jin, they only have one love interest, so there's no dramatic tension. Still, at least there are actual relationships now. I suppose that's an improvement over back when they were all pretending like they didn't care.

"[HanCinema's Drama Review] "Boy and Girl From the 20th Century" Episodes 21-22"
by HanCinema is licensed under a Creative Commons Attribution-Share Alike 3.0 Unported License.