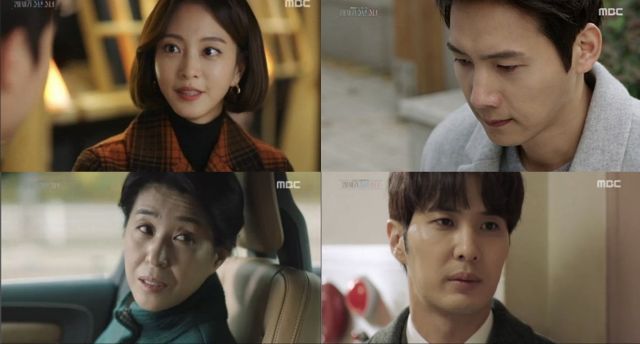 So-ni is a very emotional guy. We can tell this because in nearly all of his scenes, whether its sick at home or flashbacks with his stepbrother or just casual conversation with Jin-jin, So-ni is always expressing very strong emotions. What is missing from So-ni's character is much in the way of explanation as to why he has these strong emotions in the first place. So-ni only really knows Jin-jin, after all, from the fake marriage show. Before that she was just an abstraction.

But the underdeveloped relationship between So-ni and Ji-won is the far more glaring omission. While watching one brother get on his knees and cry in front of the other one, I was suddenly struck by how, way back when we got the flashback of how they first met...that they didn't actually say anything. It was just implied that after that moment So-ni and Ji-won gained a powerful brotherly bond, because we skip right to the present day with no intervening context.

This absence of backstory, coupled with the usual lack of conflict, creates an awkward situation where acting is concerned. All the emotional scenes involving So-ni and Ji-won come off as highly overwrought. The climax in particular is disproportionately dramatic. Even if Jin-jin and Ji-won's relationship is exposed...so what? That's happened with media personalities on these programs before, and it's never such a big scandal as to threaten anyone's career.

So-ni's actions might make more sense out of jealousy, since exposing Jin-jin and Ji-won's relationship would prematurely end any hope he has of getting together with Jin-jin himself. Unfortunately, So-ni is such an explicitly hopelessly noble character such potentially intriguing dramatic conflict is unlikely. Incidentally, the juxtaposition of So-ni's agony over the situation is a sharp contrast to a few scenes earlier, when another character who really should have known better was loudly talking about Jin-jin and Ji-won's relationship in public was played off as a joke.

"Boy and Girl From the 20th Century" is less an explicitly bad drama as it is one with pretty much no point, which tries its best to wring major drama out of minor nonsense. Episode twenty-three has an entire subplot where Yeong-sim has to decide whether to hang a sign on the door. She doesn't talk to Kyeong-seok about this ahead of time, so he gets mad at her. That's it. That's the entire story. Also Ah-reum and Woo-seong are now explicitly dating. Yay, I guess.

"[HanCinema's Drama Review] "Boy and Girl From the 20th Century" Episodes 23-24"
by HanCinema is licensed under a Creative Commons Attribution-Share Alike 3.0 Unported License.