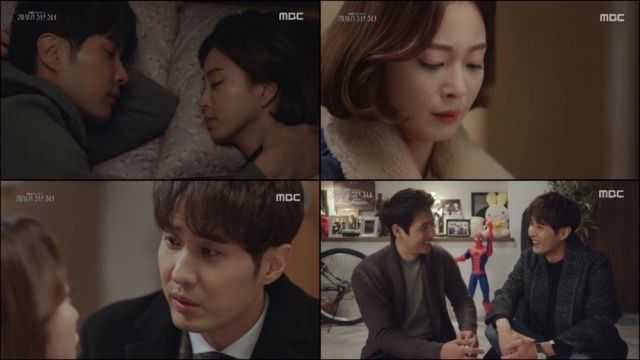 Jeong-eun (played by Shin Dong-mi) is So-ni's manager who has something most of the other characters in "Boy and Girl From the 20th Century" do not- clearly defined motivation. Jeong-eun wants everything involving So-ni's career to run smoothly. She's constantly acting as a mediary between So-ni and producers. Jeong-eun is frequently stressed because of this, but trusts So-ni's good intentions, and So-ni, for his part, does his best to reassure her that nothing is going to go wrong.

While Jeong-eun is a fairly peripheral character, So-ni's relationship with her is much better defined than his relationship with Jin-jin. So "Boy and Girl From the 20th Century" sort of implies that it was really for Jeong-eun's sake that So-ni made such a big effort to prevent footage of Jin-jin and Ji-won from being released. Or at least, his actions feel a lot more meaningful to me when interpreted that way.

Jin-jin, after all, is a grown woman with her own management team who can take care of herself. I don't feel particularly invested in the sanctity of the fake marriage program. The real-life version of it has actually gone through "scandals" like this before yet still manages to air in the present day. That no one is even aware of So-ni's sacrifice further cements the idea in my head that his actions were intended for the benefit of the only character with whom we ever see him have normal conversations.

...That's what's really lacking from this drama. Normal conversations. There's a scene here where Woo-seong and Kyeong-seok meet each other. My first thought was, oh cool, we've never seen these guys talk to each other. Kyeong-seok in particular never talks to anyone aside from Yeong-sim. I wonder what their personalities are like in a different context? Then, right when something interesting is about to happen, the scene ends and everyone goes home.

There's a very haphazard quality to the writing in "Boy and Girl From the 20th Century" at this point. The lack of even the effort at worthwhile content is such I'm not even sure if the next story is the last one or not. "Two Cops" is slated to start a week from now in this timeslot, yet "Boy and Girl From the 20th Century" is still labeled as having a thirty-two episode run. Well I, for one, don't know what this drama would even do with another week. Extended weepiness over Jin-jin's mother needing eye surgery?

"[HanCinema's Drama Review] "Boy and Girl From the 20th Century" Episodes 25-26"
by HanCinema is licensed under a Creative Commons Attribution-Share Alike 3.0 Unported License.