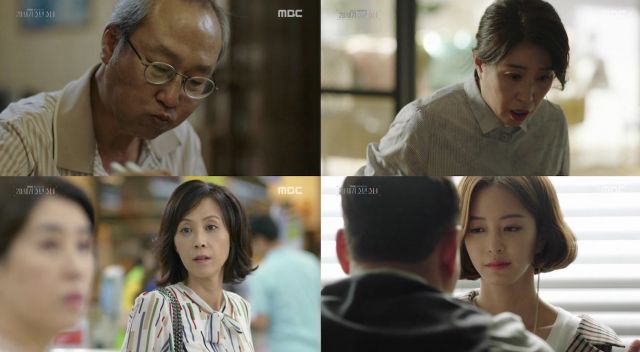 It's surprisingly difficult to emphathize with Jin-jin. Yes, granted, a sex tape is threatening her career. This is an unsourced sex tape, that will (and is) immediately proven to be fraudulent upon being properly sourced. So in the meantime, Jin-jin suffers bad public relations mostly because her manager Gi-bong (played by Kim Kwang-sik) is indisposed. Not that it's his fault. A late flashback shows how Gi-bong has long worked tirelessly to personally promote Jin-jin's career.

That's the odd contradiction of "Boy and Girl From the 20th Century"- the narrative is subpar. There's almost no dramatic tension. But anytime the drama gets close to a genuine emotional moment, it manages to be reasonably touching. The scene with Gi-bong putting up the posters is so good it made me wish I was instead watching a drama about Jin-jin and her team struggling to make their way to the top.

But as presented here, Jin-jin just comes off as incompetent at best. In all fairness it's more that the paparazzi are disproportionately powerful. How they found the gynecologist is not explained, and the idea of their locating Jin-jin's family home is just as dubious. Although once again, the paparazzi storyline exists for the sole purpose of putting Jin-jin through the ringer. The threat's just too hollow for that to mean anything, especially since Jin-jin is still objectively successful and probably rich no matter what the paparazzi do.

Yeong-sim is a much more interesting character simply because she's starting from the bottom. This is a woman who is kept emotionally afloat entirely thanks to the support of friends and family. It's sad watching her struggle to break into the legal profession, and the prospect of her failing once again feels very real, if only from her perspective. Obviously the plot wouldn't go anywhere if she actually failed, especially since handsome lawyer Kyeong-seok (played by Oh Sang-jin) is her obvious love interest.

Then there's Ah-reum, about whom I still don't know much more than just how she spends a lot of time at the gyencologist's office. There's always her love interest, Woo-seong (played by Ahn Se-ha), but he has the same problem as all the other characters in this drama. Woo-seong has a few defining characteristics, an obvious romantic plotline, yet no apparent character arc whatsoever. While lacking in truly awful flaws "Boy and Girl From the 20th Century" remains quite bland, and offers little of interest.

"[HanCinema's Drama Review] "Boy and Girl From the 20th Century" Episodes 3-4"
by HanCinema is licensed under a Creative Commons Attribution-Share Alike 3.0 Unported License.