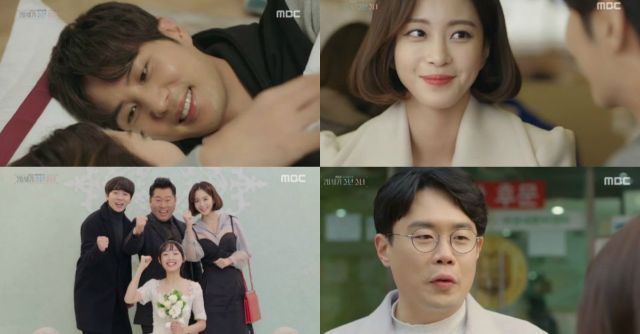 So apparently Jin-jin's family didn't know that she was dating Ji-won? Once again I'm left scrambling trying to figure out whether the drama ever actually explicitly said that the family knew, or whether I just assumed that they knew because there was no other way for them to interpret the couple's surreptitious behavior. Why any of them would be upset at this revelation is equally unclear to me, since I was under the impression they were inviting Ji-won to dinner mainly because they saw him as good son-in-law material.

Anyway, Jin-jin and Ji-won are not married at the beginning of episode thirty-one, nor are they married at the end of episode thirty-two. We do get a fakeout wedding between minor characters, a drama trend lately that I would really just like to see go away. It's not clever. All those setpieces do is remind me that I could have been watching an actual active saisfying love story play out instead of whatever I'd been watching up until then.

So-ni gets a sympathy love interest, Lee Sang-woo's real life wife Kim So-yeon who plays the director of the historical drama. She doesn't seen very good at her job, constantly demanding more takes without explaining what was wrong with the previous ones. Also I don't know what the deal was with the windblower scene. You'd think the production team of "Boy and Girl From the 20th Century" would know more about drama production considering that they, themselves, are a drama production team.

As usual, the drama's not even trying to be plausible. That Ji-won was unmasked in the paparazzi articles is nonsensical, because normal people are never identified by name when they're romantically connected to a celebrity. Time and again "Boy and Girl From the 20th Century" has built conflict around problems that don't actually exist in the Korean entertainment industry, which is especially weird considering that the Korean entertainment industry has plenty of actual problems that could be discussed instead.

But even that problem isn't as big an issue as the sheer aesthetic pointlessness. Ah-reum calls off her relationship with Woo-seong because talking to family members is awkward? Seriously? And the way Yeong-sim is just off-handedly pressuring her mom into getting a divorce is especially frustrating. Getting a divorce is hard! And you're a divorce lawyer, so you should know better than to act like it isn't! These storylines could have worked with build-up, but without it, they're just insulting.