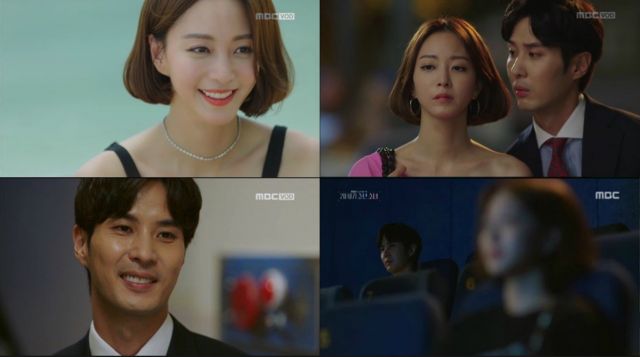 The main plot of "Boy and Girl From the 20th Century" just seems to be about dating. Specifically, we're watching the kind of dating where it takes forever for anybody to make a decisive first move. At one point a character resorts to causing a fake car accident for the sole purpose of having an excuse to engage another character in conversation. I'm frequently left wondering- are these people really supposed to be in their thirties? Ji-won (played by Kim Ji-suk) should especially know better, since he's Jin-jin's love interest. These people act like teenagers.

No, that's not true. We continue to get teenage flashbacks fairly frequently, and it's pretty jarring how over a much shorter period of time Ji-won and Jin-jin are apparently able to make a great deal more progress in their relationship by just talking to each other in typical bashful awkward teenage fashion. Everyone in the modern day is apparently just too dignified to simply express romantic interest in a straightforward manner.

The reminiscing tone present in "Boy and Girl From the 20th Century" is not appropriate given the character actions. They should be thinking in terms of serious self-introspection, not light fluffy nostalgia. Logically speaking, it feels like we are supposed to be critical of the beliefs of the main characters when it comes to romantic relationships, yet the drama consistently presents their opinions as something we should be in on wink wink. At one point a character even directly addresses the camera.

As in, there's actual fourth wall-breaking, not just that vapid reality show that Jin-jin is always on. For Jin-jin's mother Mi-kyeong (played by Kim Mi-kyung) and father Chang-wan (played by Kim Chang-wan) to watch that program in obvious sad disapproval of their daughter's very weird views on relationships, well, that just mixes the message further. That moment is enough to make them the most sympathetic characters in the whole drama, when the impression is probably supposed to be how they just don't get modern relationships.

Now, if the three female leads were actually clearly presented as having bad unrealistic ideas, that would be different. But observe Ah-reum's whole montage of past failed crushes. Everything about that montage, right down to Jin-jin's silly pigtails, implies mere quirkiness. There's no indication that Ah-reum has very fundamentally flawed ideas about men, and that lack self-awareness is the main factor dragging "Boy and Girl From the 20th Century" down.

"[HanCinema's Drama Review] "Boy and Girl From the 20th Century" Episodes 5-6"
by HanCinema is licensed under a Creative Commons Attribution-Share Alike 3.0 Unported License.