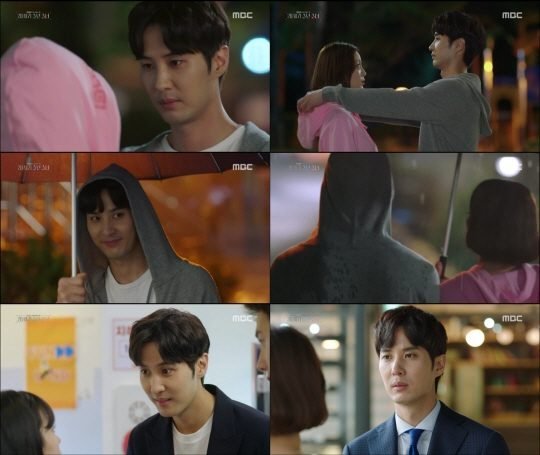 So-ni (played by Lee Sang-woo) is Ji-won's stepbrother. His main purpose is the story is to give Ji-won someone to talk to that is not Jin-jin or her wacky friends, which is helpful. I rather like the banter of their bro talk, and I especially like how Ji-won and So-ni are apparently incapable of getting on each other's nerves because they are such inherently nice and pleasant people. Although then again, maybe I shouldn't be praising a lack of conflict in this drama, what with its issues on pacing.

If you ever saw the promotional ads for "Boy and Girl From the 20th Century", you probably noticed a very cute scene where Ji-won tells Jin-jin he is not married. This is such a great chemistry establishing scene I was expecting it within the first few episodes. While its appearance in episode nine is appreciated, it feels really weird that these plot points, like so many others, have been exposited so late. So-ni himself is the second male lead, and we're only just now finding out who he is.

Also Ah-reum is a flight attendant. I can't remember whether this was previously mentioned. Not that it matters. Ah-reum's main character traits are that she likes beer and is boy crazy. In a younger character this might come off as charming but as a woman in her mid-thirties Ah-reum just ends up looking childish. Also she is a public menace, making a mess of the Han River Park.

Ah-reum's character badly fails the gender test. As in, if she were a man, Ah-reum's behavior would be horrifying. To date, the only real accomplishment of her storyline is that it makes me feel sorry for Woo-seong. It also leaves me a little confused about how Woo-seong can be Ah-reum's obvious love interest yet neither Ah-reum nor Woo-seong seem to have any awareness of this. In all fairness, they don't really seem to have much in common aside from being high school chums.

So it's fortunate that on the other side of "Boy and Girl From the 20th Century" Han Ye-seul and Kim Ji-suk have great if unrealized chemistry. I'm really digging the family meals they all keep attending together. Even if Jin-jin herself is totally disaffected on the whole marriage issue, it's obvious that her parents have high hopes. They're easy characters to identify with because they, like me, really just want to watch a romantic comedy and are pleased with any plot movement in that general direction.

"[HanCinema's Drama Review] "Boy and Girl From the 20th Century" Episodes 9-10"
by HanCinema is licensed under a Creative Commons Attribution-Share Alike 3.0 Unported License.