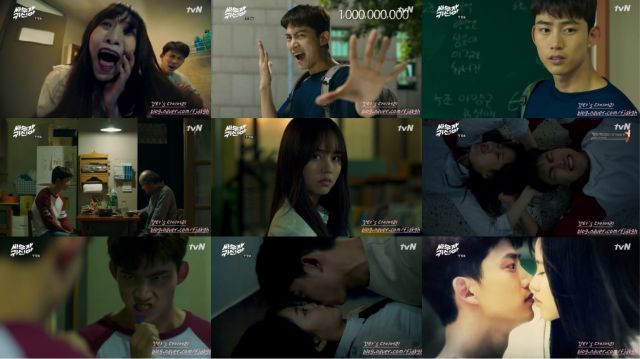 Bong-pal (played by Ok Taecyeon) is a college student who pays for his tuition by accepting jobs to fight ghosts. He does not do so through magical means, but rather by punching them, or some variation thereof. Some ghosts are more punchable than others. Hyeon-ji (played by Kim So-hyun) falls into the "harder to punch" category. Initially just toying with Bong-pal, Hyeon-ji eventually realizes that Bong-pal is the only real lead she has in unraveling the mystery behind her own death.

"Bring It On, Ghost" is to date, principally a comedy. Aside from the obvious absurdity of its main character being a man who gets into fistfights with ghosts, members of the supporting cast each get their own special gimmick. Lee Do-yeon features as an older ghost by the name of Kyeong-ja who appears to be Hyeon-ji's only friend. I really hope she gets more scenes than just the two we see here, because Lee Do-yeon is a very good actress who deserves better than the cameos she usually gets.

Bong-pal's mentor (or maybe just a guy that he hangs out with) is Myeong-cheol (played by Kim Sang-ho), a luckless Buddhist priest. This is more excellent casting- Kim Sang-ho excels at these kinds of pathetic roles, and he's exactly the kind of Buddhist priest I would expect to see in a world where ghosts have to be punched to death. His scenes are absolutely delightful even if they have fairly little action.

Then there's Cheon-sang (played by Kang Ki-young) and In-rang (played by Lee David), a couple of idiots who try to get involved in the lucrative ghost-hunting market and are predictably terrified out of their minds even though they can't actually see ghosts. Their greater purpose in the story is as yet unclear except to the extent they provide a "normal" contrast. All the other characters are so very eccentric it's helpful to see how non-spiritual people view ghost adventures.

I would not describe any of characters in "Bring It On, Ghost" as being spiritual, really, but that's where most of the charm lies. While these people are all rather ill-suited to the ghostly life, these are the lemons they're stuck with, so they make the best lemonade they can. So far "Bring It On, Ghost" looks excellent in execution- kudos to director Park Joon-hwa's vision. I can only hope the story will be as enthralling now that the basic introductions are out of the way.

"[HanCinema's Drama Review] "Bring It On, Ghost" Episode 1"
by HanCinema is licensed under a Creative Commons Attribution-Share Alike 3.0 Unported License.