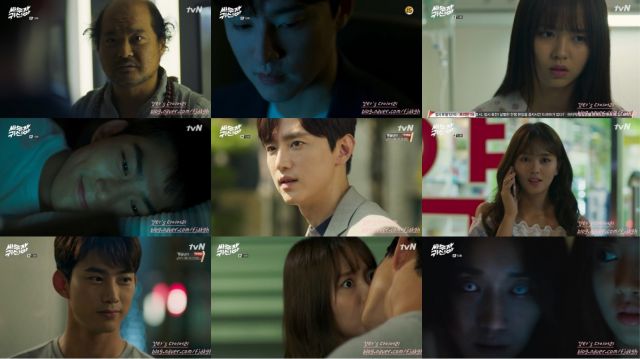 As "Bring It On, Ghost" inches ever closer to the climax the various supporting characters have to awkwardly move in order to discover what viewers learned a long time ago- that Hye-seong is a very bad man who is not to be trusted. It bears repeating. Watching Myeong-cheol, Cheon-sang, Im-ran, and the detectives uncover clues would be a lot more engaging if this wasn't just stuff we already knew. Actual new information would be nice.

Let's take the ID card as an example. The way it keeps popping up is just annoying at this point, since now I'm wondering why Hye-seong ever bothered to keep it around in the first place. It couldn't have been a trophy, because he wasn't actually trying to kill Hyeon-ji. Until recently Hye-seong hadn't even bothered to confirm that she was dead. The ID card was generally useless heavy-handed foreshadowing that spoiled rather than whetted anticipation for the plot.

All of this is, as usual, a consequence of Hye-seong's storyline taking place in a completely different realm than the actual main plotline of Bong-pal and Hyeon-ji fighting generic ghosts. I do find it funny that while Hyeon-ji was a total pro at ghostbusting back when she was a ghost, she's fairly useless now. As a normal sensible person it does not occur to Hyeon-ji that she can solve her ghost-related problems simply by punching them.

The way she flits around campus is pretty fun too, in its own gloriously unaware way. Hyeon-ji seems to have forgotten that Bong-pal's claim of being her boyfriend is rather nonsensical, given that she's been in a coma for the last several years. But then there's lots of stuff that Hyeon-ji isn't questioning, like how both she and Bong-pal apparently have the ability to see ghosts, and how Hye-seong seems to be around every street corner offering to be generally helpful.

There's lot of elements like this in "Bring It On, Ghost", that are less bad as they are structured very poorly in a way that seems specifically designed to make these scenes unmemorable. Consider the cameo by Seo Hyun-jin. It's really easy to miss because she's just doing a random walk-on role that doesn't even have a joke. Meanwhile, Myeong-cheol takes a break from investigating Hye-seong to give Bong-pal relationship advice in lieu of explaining the whole serial killer issue which really does seem like it should be a higher priority.

"[HanCinema's Drama Review] "Bring It On, Ghost" Episode 13"
by HanCinema is licensed under a Creative Commons Attribution-Share Alike 3.0 Unported License.