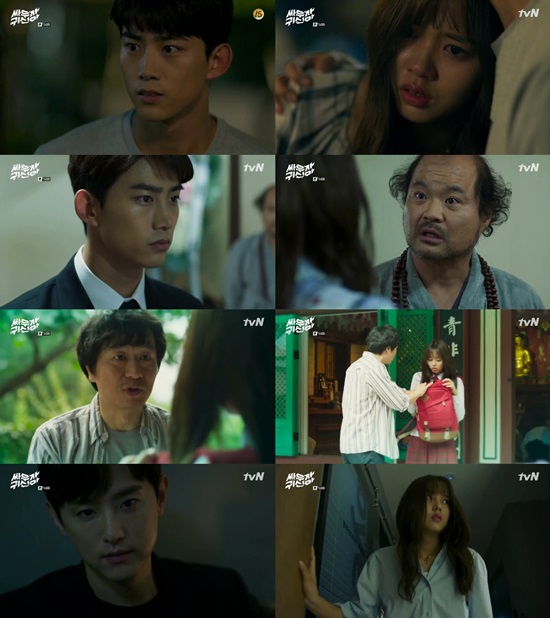 I rather like "Bring It On, Ghost" when it's just about Bong-pal and Hyeon-ji hanging out trying to get the hang of the hold ghost fighting process. This episode helpfully reminds us that Hyeon-ji is by no means a helpless damsel- we've seen plenty of pictures of her in a Tae Kwon Do uniform, it's just never occurred to her that there might be a practical application to these abilities. It's also nice how Hyeon-ji inspires Bong-pal to do fun stuff like may use of Ok Taecyeon's other job talents, and she's impressed by his sincerity.

For all that, though, sooner or later the plot has to get back to Hye-seong, and the sheer irritating mechanics of his character often serve to make it hard for me to remember the good times in "Bring It On, Ghost". To recap- Hye-seong's current plan is to spend as much time with Hyeon-ji as possible in the hopes that by sheer dumb luck the memory relapse will happen while he is in her presence. Apparently Hyeon-ji isn't working with an actual specialist on this.

We do at least finally find out what Hye-seong's deal is through a helpful flashback. Once again I'm disappointed that "Bring It On, Ghost" felt it was necessary to have Hye-seong murder a cat and two people to cover up the cat murder. If not for that stupid subplot Hye-seong might actually come off somewhat sympathetic. Not super sympathetic. Murder is murder after all, but aside from those three Hye-seong's other murders do at least have coherent motives.

Myeong-cheol, by the way, continues to be less than helpful. One scene manages to be unintentionally funny by having Bong-pal not listen to Myeong-cheol's instructions mainly because he's used to Myeong-cheol's directives not being about anything all that important. Of course, that entire plot point is once more in the awkward territory of main characters only just now learning what the viewers did several episodes ago.

It's a shame, since Bong-pal's reaction to the situation is quite understandable and sad. It's easy to forget that as immature as the mentally teenage Hyeon-ji may seem, Bong-pal is only a few years older than her. While he's had lots of horrible experiences even now Bong-pal doesn't really know how to deal with all that. It's nice, then, that Hyeon-ji can take a break to realize that, you know, it's not all about her, even if that may be her first reaction.

"[HanCinema's Drama Review] "Bring It On, Ghost" Episode 14"
by HanCinema is licensed under a Creative Commons Attribution-Share Alike 3.0 Unported License.