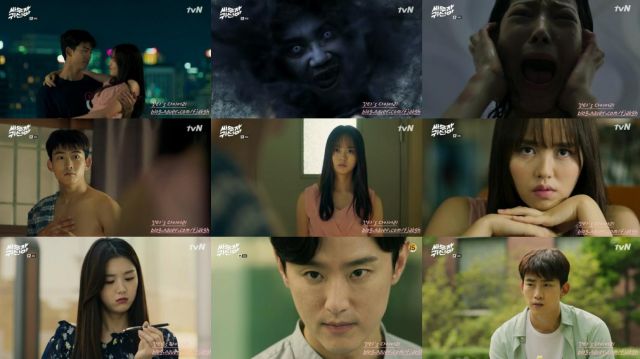 So apparently...ghosts can wear dresses? I don't have any big logical problems with this, it's just that of all the questions "Bring It On, Ghost" could be answering right now "can ghosts wear dresses" really strikes me as the most irrelevant one. Much like the previous episode, this episode is simply another restatement of the same plot points that dominated the first two. Bong-pal and Hyeon-ji have anatagonistic fun, Myeong-cheol is not a very good monk, Cheon-sang and In-rang are a couple of dopes, and we still have no idea what's going on with Hye-seong.

Really. Writer Lee Dae-il-I is still going on about that stupid cat issue, which is another very uninteresting story point to focus on in a drama that's supposed to be about fighting ghosts. I can't figure out what's going on with the pacing. It feels like each new episode of "Bring It On, Ghost" is simply an alternate version of the first one because the production team didn't want to completely throw out their old drafts.

Let's take Cheon-sang and In-rang. To date they're the only ones who have been able to, however ineffectually, locate ghosts. Bong-pal and Hyeon-ji are wrapped up in their own little worlds and only ever barely glaze over the backstories of the enemy ghosts before getting into fights. This is workable when the antagonistic ghosts are one-off jokes like the peeping tom schoolgirl crossdresser, or simple archetypes like the domestic abuser. But this episode and the last have tried to do actual pathos with its ghosts, to limited effect.

"Cheo Yong: The Paranormal Detective" managed to pull this off much more effectively, because in that drama the lead character and his allies were making a proactive effort to locate ghosts, so the story unfolded much more organically. "Bring It On, Ghost" is using the basic format of dealing with one-off ghosts without really understanding how that brand of storytelling is supposed to work. The result is colorful characters, yet not much else.

"Bring It On, Ghost" is starting to wear out my patience. I'm beginning to question whether this drama was ever actually properly storyboarded, or whether the pacing really is just that bad. Without proper variation and movement in context the greatest jokes in the world get stale awfully quickly, and "Bring It On, Ghost" had pretty low brow humor to begin with. I'd just really like to see more dedication to holistic storytelling and less to individual gags.

"[HanCinema's Drama Review] "Bring It On, Ghost" Episode 4"
by HanCinema is licensed under a Creative Commons Attribution-Share Alike 3.0 Unported License.