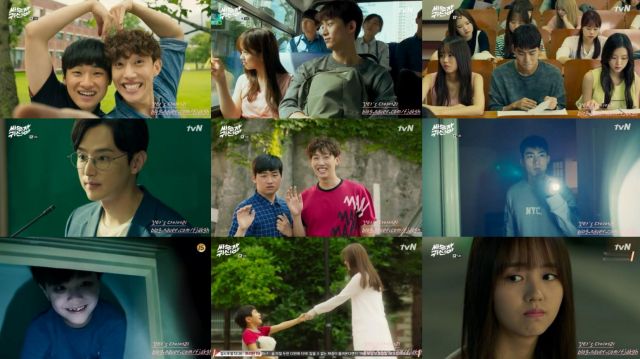 The latest dynamic plot development is that apparently ghosts can sleep. Beyond that, Bong-pal and Hyeon-ji spend most of the episode hanging out as if they were the lead characters in a romantic comedy. Eventually Cheon-sang and Im-rang are able to locate a ghost for the requisite ghost fight. Myeong-cheol provides vague hints of an interesting backstory without actually saying anything useful. Hye-seong is probably the villain but apparently he can't even see ghosts so who knows why he's even in the story at all.

"Bring It On, Ghost" has settled into a very formulaic pattern. I'm convinced at this point that while writer Lee Dae-il-I properly gave "Bring It On, Ghost" a proper storyboard, it was not a sufficiently complicated storyboard which is why each episode is simply a restatement of the previous one with a slightly different ghost and the lowest level of plot progression possible. That's why we know so little about the backstory- it's the only real surprise the production team has, and it's too early for them to reveal surprises.

That much is just speculation but there simply isn't that much to discuss because the presentation it "Bring It On, Ghost" is hopelessly flawed. Once the ghost is dispatched, then and only then do we find out that Bong-pal had an indirect emotional connection to the case. The epilogue would have been much, much more effective if there was ever any indication of Bong-pal's emotional state beyond these fragmented flashbacks.

The main excuse for this is that more screentime is necessary for cute romantic chemistry between Ok Taecyeon and Kim So-hyun. As good as that chemistry is, at this point I'm getting a little tired of it simply due to the overexposure. Cheon-sang and Im-rang's comedic antics come off as more fresh simply because it involves more actual new material. Like the van. That is a good ghost-busting van.

A pity the ghost-busting isn't up to snuff. The ghost fight was pretty weak compared to past ones, which really typifies one of the big worries I have with "Bring It On, Ghost"- that this is a drama with a very excellent central idea and the perfect cast to pull it off, but the production team doesn't have enough interesting ideas to make it work consistently. I do hope I'm wrong about this. While "Bring It On, Ghost" isn't aggressively bad or anything so far it's definitely not living up to its potential.

"[HanCinema's Drama Review] "Bring It On, Ghost" Episode 5"
by HanCinema is licensed under a Creative Commons Attribution-Share Alike 3.0 Unported License.