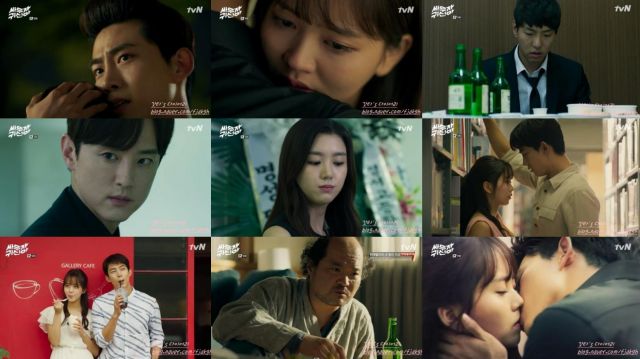 I find that "Bring It On, Ghost" is much easier to tolerate if I stop thinking of it as being a drama about ghostfighting and just look at it as a romantic comedy which happens to involve a normal living human dating a ghost. That much does resolve the horrible imbalance when it comes to screentime. The ghost shows up so late this episode I frequently wondered whether we were actually going to get to see the ghost at all.

It also somewhat explains Hye-seong's awkward role in in a largely parallel story that has very little to do with Bong-pal or Hyeon-ji. A story which, I am sorry to report, ends fairly uninspiringly with Hye-seong throwing the police off his trail through a stupid plan which should not have worked. Let's count all the potential avenues for failure Hye-seong miraculously avoided- the coroner's report, a locked door, a locked phone, suspicious parents, CCTV, neighbors noticing the loud noise, an alibi...I could go on.

The story stops because the detectives aren't actually the main characters so they can't be the ones who bring Hye-seong in. The story started in the first place so writer Lee Dae-il-I could clumsily exposit that Hye-seong is evil. But this entire plot has, in the end, been filler that mostly just undercuts Hye-seong's plausibility as a villain. Let's recall that the impetus for this storyline was Hye-seong's rather pointless murder of a stray cat several hours after it had scratched him.

In some ways I guess I should be thankful, since stupid as Hye-seong's plot may be it is at least a plot. The rest of "Bring It On, Ghost" is just Ok Taecyeon and Kim So-hyun making cute faces at each other. I will admit that as far as cute face making actors go these two are definitely at the top of their game. Bong-pal and Hyeon-ji are, more than anything else, very silly and this works quite well with the drama's sillier jokes.

The person Bong-pal asks for advice when it comes to his crush, for example, is about the worst possible person to ask for advice on this subject. But the cast is just so sincere with every possible reaction it's hard not to laugh. Even when "Bring It On, Ghost" shifts from making light of how Bong-pal looks like a crazy person to acknowledging this is actually a pretty serious problem, the charm of the situation and the likability of the performers remains pretty strong.

"[HanCinema's Drama Review] "Bring It On, Ghost" Episode 9"
by HanCinema is licensed under a Creative Commons Attribution-Share Alike 3.0 Unported License.