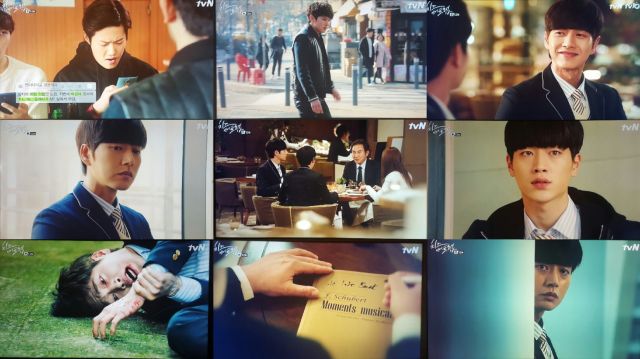 I struggle with trying to decide whether the Yeong-gon storyline is overdone or not. The thing is, there are people in real life who will do that- just keep doing the same action and somehow expecting different results, not realizing that certain effects are cumulative. In this case, even after getting an opportunity to smooth social relations over with fellow students who have turned very cold to Yeong-gon over his stalking behavior, Yeong-gon is still at risk of being sabotaged by an unseen enemy.

This all does eventually end up being relevant, though, because that enemy has backstory which explains a lot of what we've seen of this character in the present day. There's a fine line between meting out deserved punishment and being cruel. Well, wait, no there isn't. It's perfectly possible to be cruel to a person who deserves it. The more squeamish among us just don't like watching anyone get pushed around for whatever reason.

Like In-ho. His generally antagonistic attitude does not win many friends, but he expects that the friends he does have will always be by his side through thick and thin, because they know what kind of person he is. Discovering the central cause of In-ho's split from Jeong ends up being massively important toward understanding both of their personalities. Where Jeong strikes unseen from the shadows, In-ho's an open book who doesn't really care who overhears him saying what.

Neither one of these personality types are really any worse than the other. In-ho and Jeong both have to be provoked into a fight- but Jeong's consistently frightening aloofness is an almost perfect mechanism for antagonizing In-ho even when that obviously isn't his intent. Seeing these two young men fight in context puts a tragically understandable spin on their inability to be civil to one another in the present day. I can see now why Jeong's encouragement to In-ho to resume his musical interest was interpreted so maliciously.

And of course, there's the real centerpoint in all this- Seol. The young woman with virtually infinite patience, as is demonstrated by her continued willingness to talk to Yeong-gon. The personality clash between In-ho and Jeong has caused them to hate themselves almost as much as each other, all for letting their interpersonal conflict escalate so badly. It's little surprise that all they want is a little validation- to feel like they're people rather than weirdos.

"[HanCinema's Drama Review] "Cheese in the Trap" Episode 12"
by HanCinema is licensed under a Creative Commons Attribution-Share Alike 3.0 Unported License.